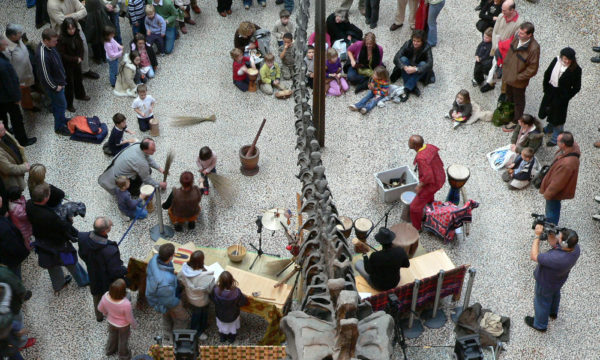 Brian Switek, Give natural history museums back to the grown-ups, Aeon, October 2016

You’d think that a hall of taxidermied animals would be the epitome of quiet. The animals were all shot, skinned and propped up against idyllic backdrops decades ago, mute muses for visitors ready to lose themselves for a few quiet moments in nature scenes that they will likely never see firsthand. But on this afternoon in the depths of the Denver Museum of Nature and Science, the whispers of the wild were drowned out by a different sort of noise. Screeches of ‘Smash it! Smash it!’ bounced off the wood and glass cases as a trio of children jumped and danced across an interactive floor mat, trying to squash as many virtual insects as possible.

The pixelated mat seemed out of character for a museum conceived to inspire affection for nature, even for the creepy crawlies. A dragonfly is as worthy of wonder as a bull Steller’s sea lion or wolf pack. But the purpose of the mat was all too clear. Tired-looking parents slouched in chairs around the out-of-place stomping ground, staring off or checking their phones as their kids went nuts. Museums were originally meant to be places of inspiration, literally the ‘seat of the Muses’. In our 21st-century interpretation, however, we expect them to function as providers of kid-oriented entertainment more than anything else.

I wish I could say that the cacophony I encountered in Denver was an isolated case. It’s not. Whenever I visit a natural history museum, especially if I’m intent on seeing the dinosaurs, I try to arrive early and race over to the exhibits before the school groups and strollers are set loose upon the floor. And I’m not alone in my concerns. As I’ve chatted with other museum-goers, the same lament has come up over and over again: as a culture, we’ve been steadily nudging natural history museums to become more like theme parks or the cartoonish restaurant chain Chuck E Cheese’s. (As Tiffany Jenkins has pointed out, the same problems plague today’s anthropology and art institutions as well, not to mention aquariums and zoos.) If visitors leave with even a chunklet of new knowledge, it’s a win.

We are facing the gradual extinction of what makes us uniquely human, our yearning for discovery. The strength of museums isn’t in loud displays that deliver pat answers, or in flashy diversions to keep the little ones busy. Their most potent elements are the authentic wonders silently on display, items that cannot be seen anywhere else. I’ll always treasure my memory of visiting the old dinosaur halls in the American Museum of Natural History when I was five, standing beneath the bones of the ‘Brontosaurus’ with my imagination running full tilt about what this animal looked like, moved like, and sounded like. It’s what set me on the path of writing about prehistoric life as a career. In years to come, I’m sure we’ll hear the next generation convey similar stories, focusing on the one exhibit or display that warmed their hearts to natural history – if we give them the chance. I hope they’ll have the same room for contemplation that I had as a child, but I fear that they will share my other experience: ambling the dim halls to ponder life from the darkest ocean depths to prehistoric lost worlds, only to run headlong into barely supervised day camps and school groups howling at interactive screens and meaningless sand pits.