You are here: Home » Articles filed under: 'News' » Article: 'Nature on Display'

A partnership exhibition developed and curated by the National Archives of Australia and the South Australian Museum displays the best of Australia’s natural science artworks. 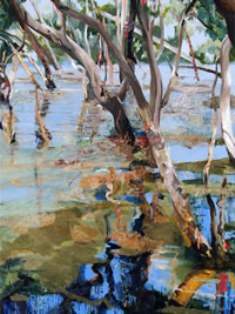 Magnified: 12 Years of the Waterhouse Natural Science Art Prize represents the tenth time the two organisations have collaborated to host the exhibition.

Curator of the National Archives, Sara King said it was one of the most popular exhibitions the Archives hosted each year.

“Local residents and visitors to Canberra return year after year to see the new winners —and this year we are proud to have been involved in curating the exhibition,” Dr King said.

Dr King said it included a May Gibbs illustration featuring flower babies arrayed in gumnuts and floral adornments from the National Archives, displayed alongside the 2013 Waterhouse winner, Flight of Fancy — a cape created by artist Judith Brown using bulb casings and leaves.

“Such exhibits show the changing attitude to nature and animals over time,” Dr King said.

“We are always delighted by the diversity of subjects and the mediums artists use to celebrate the beauty and fragility of our natural world.”

Magnified: 12 Years of the Waterhouse Natural Science Art Prize is on display at the National Archives of Australia in Canberra until 28 March 2016.