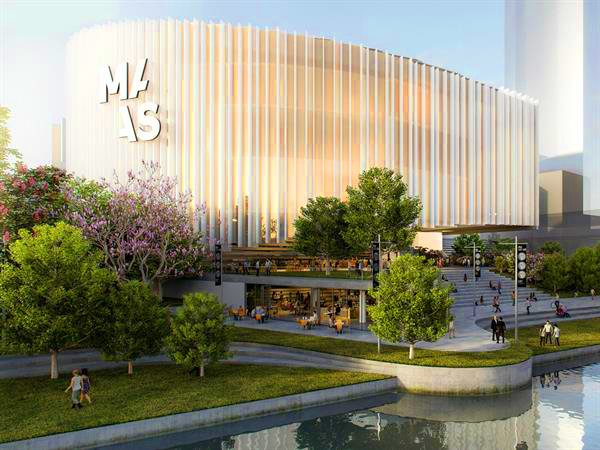 An artist’s impression of the new Powerhouse Museum in Parramatta.

In the last week of the NSW election campaign, the founder of The Balnaves Foundation has thrown his weight, and a full-page ad in today’s The Australian, against Premier Gladys Berejiklian’s proposal to move the Powerhouse Museum to Parramatta, calling Sydney a “cultural desert”.

The Balnaves Foundation, a family organisation that works to promote young, disadvantaged and indigenous Australians in the arts and medicine, has provided grants to the Art Gallery of South Australia, the National Gallery of Australia and the Museum of Contemporary Art, and it’s latest campaign is to stop the Powerhouse Museum being moved, and secure funds for construction of a new cultural hub in Parramatta.

“The NSW Liberal government doesn’t get the arts. By the government’s own reckoning, the arts annually contributes $16.4 billion to the NSW economy and 120,000 jobs, yet government annual funding to the arts is a miserable $542 million,” the ad reads.

“The argument (not to move it) is not terribly complex,” Mr Balnaves said, “(The Powerhouse Museum) certainly needs updating but it has a wider market, and is more easily accessible in the city.”

“Why can’t Parramatta have a more multifaceted centre that is flexible to growth?”

Mr Balnaves said no one in the art world was prepared to speak out against the move. Many take government grants and are ­“muzzled” because of it. “(The Balnaves Foundation) are beholden to nobody … so we can afford to be a bit activist because we don’t have to grovel,” Mr Balnaves said.

According to the government, moving the Powerhouse will cost $645m and the new facility will have almost 3000sq m of exhibition space more than the current museum in Ultimo. Mr Balnaves said it was a waste of money, and Parramatta deserved its own multi-purpose arts centre catering to everything from art to ballet.

“To my mind, an arts centre will appeal to a much broader section of the community. The Powerhouse is unique and it’s fantastic but you don’t go there every year, and it would not draw the crowd that a multi-purpose arts centre could,” Mr Balnaves said.

“I don’t think anyone’s been honest about the real cost and that always makes us suspicious because the government’s notorious for bringing things over budget.

“And the economic benefit case has not been made, and I don’t believe my taxes are being well spent on moving the museum. The government’s robbing our pockets, takes the money, and then makes decisions that don’t make sense.”