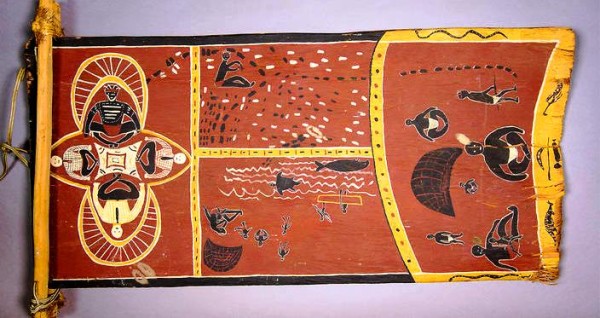 Mr Bonner’s son, Alfred Bonner,  has donated the bark painting to the Museum of Australian Democracy at Old Parliament House.

Alfred Bonner says the painting depicts his father’s life and legacy, from being born on Ukerabagh Island in northern NSW to a longstanding political career.

“It’s not just a painting. It’s the first bark painting about the first black senator in Australia,” Alfred Bonner said.

In 1971, Neville Bonner AO, a Jagera man with limited education and who devoted much of his early life to family and culture, became the first Aboriginal person to sit in the Commonwealth Parliament, serving  as a Queensland Liberal Senator for 12 years.

“He met his wife on the cattle station and had five children. He spent a lot of time fishing, hunting and at billabongs,” Alfred Bonner said. These activities are depicted in the painting, showing  “the whole story of Dad’s life to show what he went through to get into Parliament”, Alfred said.

The artist, Mr Bonner’s nephew Bill Congoo, presented the work to his uncle in the 1970s. Alfred says that Mr Bonner treasured the item until shortly before his death in 1999, when he gave it to Alfred.

Alfred donated the bark painting to the Museum of Australian Democracy on Monday, saying “I haven’t got much longer to live and I didn’t want to leave it with anyone else.”

The bark painting will be added to an existing collection of objects held by the Museum that belonged to Neville Bonner AO.