The following article was first published in ArtsHub Monday 14 April 2014.

The arts ‘key to what we do’ says ABC Arts Supremo

In the face of looming cuts, the ABC announces new arts programming and an organisation-wide arts coordinating body.

ABC TV Head of Arts Katrina Sedgwick said today that the national broadcaster is in a unique position to help shape the way Australians see the role the arts play in their lives.

‘There’s an incredible range of people who are engaged actively with the arts – at every year level and every week – who might then say, “Oh but I don’t engage with the arts”. I think it’s about labels and I think absolutely the ABC is in a unique place, because of our reach as the national broadcaster, to absolutely play a part in breaking down those walls and inviting more people in. It should be, it must be key to what we do, and it must be part of our ambition,’ Sedgwick said.

The formation of a new ABC Arts Council, announced late last Friday, will greatly assist the broadcaster in helping break down people’s perceptions about the importance of the arts in their lives, she added.

‘Obviously the arts has been a charter requirement and a central part of the ABC’s output for the last 80 years, but it’s always been done with great commitment in each separate network or division. They’ve been working independently editorially, as is appropriate, but it’s been spread and fairly scattered through the organisation.’

The new ABC Arts Council – which Sedgwick will Chair – will meet monthly to coordinate arts coverage across all platforms: TV, Radio, News and Online. 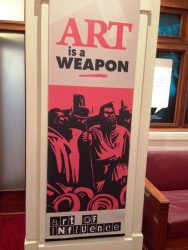 Poster from the 'Art is a Weapon' exhibition at the Museum of Australian Democracy - Old Parliament House. Source: Meredith Foley
Positions Vacant » View All
» Te Ao Māori roles – Canterbury Museum
» Producer, Public Art Program – Queensland Museum
Latest News » View All
‘… frogs also dealing with a pandemic’ AM’s
Jodi Rowley – researchers at work on mystery Read more.
SAM co-ordinating Insect Investigators
in regional schools in Qld, SA & WA Read more.
Te Papa funding preserving & digitising
Spencer Digby–Ronald Woolf photo archive Read more.
MAAS Powerhouse Parramatta contract let
LendLease building 6-stars to open 2024 Read more.
New Gold Mtn filmed @ SHM to show on SBS
Chinese miners’ voice from Vic Goldfields Read more.
Top +
Council of Australasian Museum Directors, c/o Ms Daryl Karp, Museum of Australian Democracy at Old Parliament House PO Box 3934 Manuka, Australian Capital Territory 2603 Australia, © CAMD 2021
Copyright: All information and resources provided on this website remain the copyright of the Council of Australasian Museum Directors. Permission is granted for viewing and downloading for personal and not for profit purposes. Those wishing to reproduce any materials for commercial, educational or other uses are requested to contact us.
Disclaimer: The content of this website is provided for information purposes only and is not intended as a substitute for professional advice. No claim is made as to the accuracy or authenticity of the content of the website. The Council of Australasian Museum Directors does not accept any liability to any person for the information or advice (or the use of such information or advice) which is provided on this website. The information on our website is provided on the basis that all persons accessing the site undertake responsibility for assessing the relevance and accuracy of its content. No responsibility is taken for any information or services which may appear on any linked web sites. Hostgator.
.