November 12th, 2021 | Browse other: News. | Tagged with: A New Museum Is Opening in the Korean Demilitarized Zone, new art museum in North Korea the Unimaru | 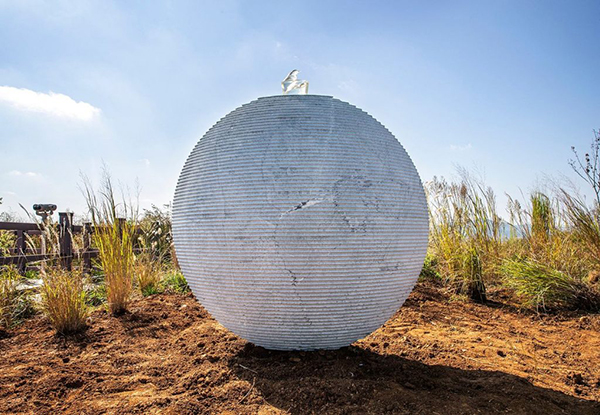 Sarah Cascone, A New Museum Is Opening in the Korean Demilitarized Zone. Visitors Will Need a Military Escort to Get There, ArtNet, 9 November 2021

The Korean Demilitarized Zone, a thin strip of land dividing the Korean peninsula on either side of the 38th parallel, at the border between North and South Korea, is one of the most heavily militarized regions on the planet, with access granted only by the North Korean government or United Nations Command.

It is also home to a new art museum, the Unimaru, which is opening its inaugural exhibition, “2021 DMZ Art and Peace Platform,” featuring works by 32 artists, including Francis Alÿs, Nam June Paik, Olafur Eliasson, and Haegue Yang. Visiting requires a military escort.

The Unimaru was built in 2003 as a temporary inter-Korean customs office, where visitors would be screened before entering the demilitarized zone, known as the DMZ. (Only about 15 percent of the Unimaru’s building is technically inside the DMZ.) 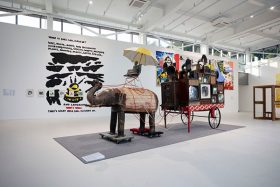 The facility had laid vacant since a larger office opened in 2007, and has just undergone a gut renovation from Hyunjun Mihn, the architecture who designed the Museum of Modern Contemporary Art in Seoul, to transform it into a high-ceilinged venue for contemporary art.

Alongside works like Paik’s sculpture Elephant Cart and Marjetica Potrč’s wall mural What Is DMZ Soil Made Of?, Chung has presented an empty frame, leaving space for the North Korean artists she wishes could have participated in the show.

The Unimaru building takes its name from the prefix “uni,” for unification, and maru, the Korean word for a space or platform, in hope that it will help build a platform for peace.

It lies just a stone’s throw from the joint security area at Panmunjom, the only part of the DMZ where anyone is permitted to actually cross the military demarcation line that serves as the border between the two countries. (Tourists can visit on official tours originating in both countries, setting foot in the other nation inside a blue-walled conference room.) 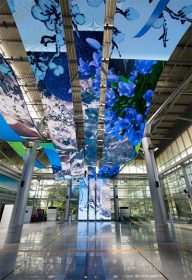 The exhibition is also on view at two DMZ train stations, the nearby Dorasan Station, and, on the peninsula’s east coast, Jejin Station. Both terminals are poised to spring into action should the countries open their borders and allow mass transit between the nations.

At Dorasan, she’s installed a massive permanent wall of six video screens that presents works by Yiyun Kang, Min Jeong Geum, and Ye Seung Lee, while Jejin Station is home to a scale model of the entire DMZ featuring living pine trees and audio recordings of the sounds of nature in the area, titled Nature Rules.

The unlikely DMZ art project, hosted by the Ministry of Unification’s Inter-Korean Transit Office, is an outgrowth of an easing in tensions between the two nations since the signing of a joint declaration in 2018. The agreement involved dismantling guard posts and removing land mines in the DMZ as part of a disarmament effort that would transform the area into an international peace zone. 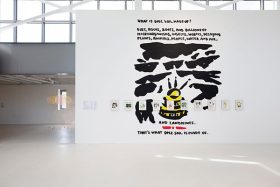 One of the five exhibition locations is actually on the site of one of these former guard posts, only about a mile from the border. There lies Migratory DMZ Birds on Asymmetric Lens—Kyott Kyott Vessel (Pale Thrush), a 2021 soapstone sculpture by South Korean artist Haegue Yang.

Chung commissioned the artist to make a new piece similar to her work in “Ground/work,” a 2020 show at the Clark Art Institute in Williamstown, Massachusetts. Presumably, this is a much different viewing experience.

“When we go to this spot, we have to wear bullet proof vests, because it’s so close to North Korea. Soldiers accompany you carrying the Korean flag and the U.N. flag,” Chung said. “I can see North Koreans moving around with a small telescope.” 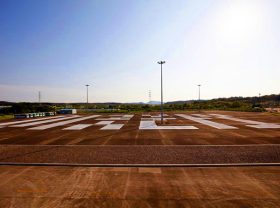 From the front, the artwork appears to be a rounded orb, but it is actually an asymmetrical lens, reflecting the divided nature of the two Koreas. On top sits 3-D printed transparent bio-compatible resin figure of a pale thrush, an endangered bird species native to the DMZ, a reminder of how the division of the nations has actually preserved the natural ecosystem.