Ex-politician, who presided over austerity cuts to culture, takes up the position on 4 October. 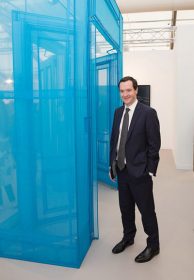 George Osborne, the former UK Chancellor of the Exchequer, has been named the new chairman of the British Museum (BM) by its board of trustees. Announced in a statement by the BM today, Osborne joins the 25-person board on 1 September and will take over from the London museum’s current chairman of seven years, Richard Lambert, on 4 October.

Elected the youngest-ever Conservative MP in 2001, aged 30, Osborne served as chancellor under prime minister David Cameron from 2010 to 2016. After quitting politics at the 2017 general election, he became editor of the Evening Standard newspaper and a part-time advisor to the US investment management firm BlackRock. In March, he stepped down from those roles to take up a full-time partnership at the boutique financial consultancy Robey Warshaw. He is also the chair of the Northern Powerhouse Partnership.

At the BM, he joins a board that includes the artist Grayson Perry—who was once rumoured to be a personal favourite of Osborne’s—and the classics scholar Mary Beard. According to the museum, the trustees unanimously approved his appointment following a search process led by the deputy chair Minouche Shafik for a “leader with a global perspective, with a demonstrable interest in culture and history, and a commitment to engaging local, national and international audiences”.

At a time when the UK’s national museums are recovering from the bruising financial impact of the Covid-19 lockdowns, Shafik paid tribute to Osborne’s “experience with finance and fundraising on a global scale”.

The BM’s director, Hartwig Fischer, anticipates Osborne’s involvement in “the biggest transformative project in our history”, a multi-year masterplan that will include major building refurbishments as well as a full rethink of the permanent collection galleries. Amid a reckoning over the colonial legacies of major Western museums, Fischer has promised that the masterplan will give more prominence to collections from the Pacific, the Americas and Africa.

Osborne says: “All my life I have loved the British Museum. To my mind, it is quite simply the greatest museum in the world. It’s a place that brings cultures together and tells the story of our common humanity.”

As chancellor, Osborne presided over major government investments in cultural projects such as the redevelopment of the Olympic Park in east London and the Factory, a new arts venue in Manchester. But he is also known for austerity policies that cut public funding for museums and culture. His first spending review in 2010 reduced the budget of funding body Arts Council England by 30%.

The news of Osborne’s BM appointment has been met with criticism on social media. The deputy Labour leader Angela Rayner wrote on Twitter: “George Osborne as Chancellor was the architect of devastating to [sic] cuts to the arts and culture. He is in no way an appropriate choice for a position at one of our country’s leading cultural and historical institutions”.

Climate campaigners, who have called for the BM to cut ties with oil sponsor BP, have also expressed concerns over Osborne’s political record on the environment. The group Culture Unstained tweeted that: “The appointment of George Osborne as chair is completely out of touch. As Chancellor, he gave huge tax breaks to oil firms like BP with the aim of maximising the amount of oil and gas they would extract from the North Sea, as well as companies intent on fracking across the British countryside. And at the same time, he was making huge cuts to funding for museums and the culture sector. The BM urgently needed a chair with the experience to meaningfully engage with colonial legacies and climate change. Instead, it has chosen yet another establishment white man whose main experience of the museums sector is decimating it.”