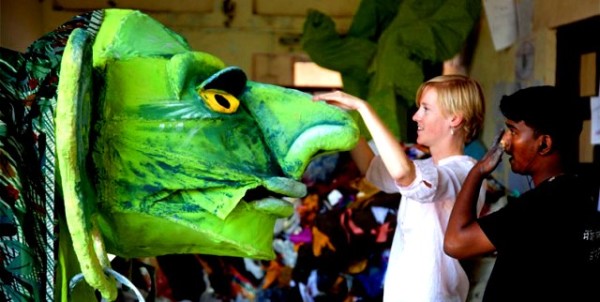 Performances by the Snuff Puppets will be a part of the 50 Bridges project, Australia’s contribution to Singapore’s 50th anniversary. Source: Snuff Puppets.

Australia and Singapore have signed a significant cultural agreement which will bring new opportunities to collaborate and showcase Australian creative talent overseas.

The Memorandum of Understanding on Cooperation in the Field of Arts and Culture between Australia and Singapore was signed yesterday in Singapore by Mr Philip Green OAM, Australia’s High Commissioner to Singapore and Ms Yeoh Chee Yan, Permanent Secretary, Ministry of Culture, of Singapore.

The vibrant relationships the countries share in the arts is in evidenced by the recently launched ‘50 Bridges’ project; Australia’s contribution to Singapore’s 50th anniversary. ‘50 Bridges’ brought public art, puppetry performances, film and BBQs to public areas in Singapore.

The Hon Tony Abbott MP, Prime Minister of Australia and Mr Lee Hsien Loong, the Prime Minister of Singapore witnessed the signing of the agreement as part of the Comprehensive Strategic Partnership, to enhance the longstanding arts and cultural ties between our two countries.

Australia already has a film co-production agreement with Singapore, which has generated $45 million investment since 2008.

The Australian Government is proud to be a signatory of this agreement which will result in new and exciting creative endeavours.