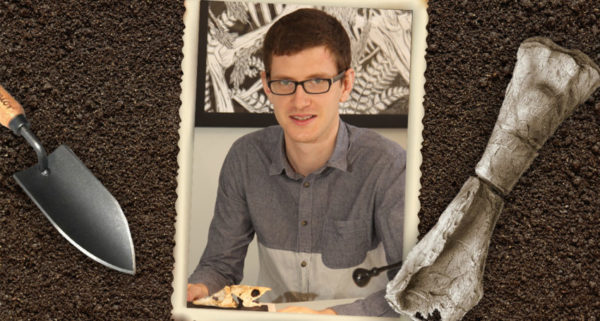 Flinders palaeontology postgraduate Benedict King is studying the characteristics of placoderms, jawless fish and the fossils of other early vertebrates. Source: InDaily.

The place of humans and other backboned animals in the tree of life has been questioned by Flinders University researchers who claim a new evolutionary tree could overturn widely held beliefs that almost all vertebrates (backboned animals) are descended from placoderms (archaic armoured jawed fish).

The research, published this week in Oxford University Press journal Systematic Biology, challenges the widely-held idea that placoderms were the direct ancestors all other jawed vertebrates on Earth.  Instead, these armoured fish were merely a side branch in evolution – and humans and other vertebrates have more complex beginnings.

“So if placoderms were not our ancestors, what was?” asks Flinders University palaeontology researcher Benedict King. “Our study suggests that no particular group of known jawed vertebrates is ancestral to the others.

“Rather, the true jawed vertebrate ancestor probably combined features of bony fish (such as carp), cartilaginous fish (sharks and rays) and placoderms – in much the same way that the common ancestor of humans and chimpanzees was neither human nor chimp but a unique amalgam of both.”

The new model used by the Flinders team to combines traditional anatomical features along with other sources of information, such as the geological ages of the fossils and how much evolution they have undergone.

Recent fossil discoveries in China, some of the most ancient jawed vertebrate fossils known, combine placoderm and bony fish (or osteichthyan) features and may be the closest thing we know of to the true ancestors of jawed vertebrates.

The abrupt extinction of the diverse group of placoderms around 360 million years ago paved the way for carp, sharks and other modern groups to expand across all aquatic environments and start their evolutionary domination.