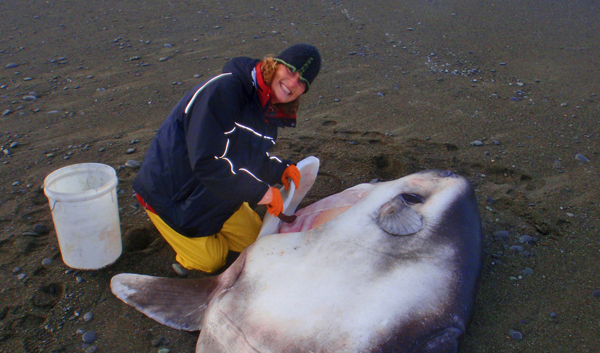 Marianne Nyegaard, The four-year treasure hunt for the hoodwinker sunfish, The Conversation, 20 July 2017

Sunfish are famous for looking odd. They are the largest bony fish in the world, can grow to over 3 metres in length and weigh up to 2 tonnes, and look a little bit like a suitcase with wings.

But when I began my PhD doing population studies on sunfish off Bali in Indonesia, I didn’t expect to discover an entirely new species. What began as something of a side project turned into a four-year treasure hunt, flying thousands of kilometres to track down evidence with the help of dozens of people.

As part of my PhD research, I analysed more than 150 samples of sunfish DNA. Genetic sequencing turned up four distinct species: Masturus lanceolatus, Mola mola, Mola ramsayi and a fourth that didn’t fit with any known species.

A new species had been hiding in plain sight for centuries, which is why we ended up calling it Mola tecta: the hoodwinker sunfish. But back then, in 2013, we didn’t even know what they looked like; all we had were skin samples containing the mysterious DNA.

Going on the hunt

The next step was trying to figure out what these fish might look like. Superficially, all sunfish look the same (that is, slightly strange). Their bodies are flat and rigid, except for their fins; they don’t have a tail; and as they grow bigger they usually develop odd bumps on their head, chin and nose.

So I started looking at pictures of sunfish, especially on social media, searching for something different. I also spent a long time establishing a network of people across Australia and New Zealand who could alert me whenever a sunfish was found.

I finally got a break in 2014. Observers from New Zealand and Australian fisheries were sending me pictures of sunfish they found out at sea, usually just a fin in the water. But on one occasion they hauled a tiny fish on board to free it from a fishing line, and got a brilliant photo of the whole thing along with a genetic sample.

This fish had a little structure on its back fin that I’d never seen on a sunfish before. Just as I was wondering if this was a characteristic of the species, I hit the jackpot when four fish were stranded in one go on the same beach in New Zealand.

I flew down to Christchurch, landed at night and drove out on to the beach. I saw my first hoodwinker sunfish in the headlights of the car – it was incredibly exciting. This changed everything, because now we knew what we were looking for.

Unravelling this mystery has been a huge puzzle. Sunfish are huge, largely solitary and fairly elusive, so you can’t just go out and sample a heap of them to study. You have to fly thousands of kilometres when there’s a stranding and hope it’s the right puzzle piece you’re looking for.

However, by looking at stranded specimens, photos and museum collections, and by verifying specimens genetically, we have been able to describe this species very accurately.

We found enough fish to describe this species on a size spectrum of 50cm to nearly 2.5m. Unlike the other species, they don’t develop lumps and bumps as they grow; instead their body dimensions stay pretty much the same between juveniles and adults. Their back fin is separated into an upper and lower part, with a small flexible piece of skin, which we have termed the “back-fold”, connecting the halves.

We don’t know exactly what their range is, but it seems to be the colder parts of the Southern Hemisphere. We’ve found them all around New Zealand (mostly around the South Island), off Tasmania, South Australia, Victoria and New South Wales (Australia), South Africa and southern Chile.

Sunfish aren’t particularly rare, but it’s tricky to study them as they simply live in parts of the ocean most humans don’t go. They dive hundreds of metres to feed, and then rise to the surface to bask in the sun on their sides (hence their name).

This habit of diving and rising throughout the day means they can be caught by a range of fishing gear, including tuna longlines or in drift gillnets and midwater trawls. Fishers have been turning them up for centuries. When we looked back through the literature to see if this species had been described before, we found sunfish in books that included mermen and unicorns, and one of the first written mentions comes from Pliny the Elder.

Positions Vacant » View All
» Head of Engagement – MAGNT
» Exhibitions Manager – MAGNT
Latest News » View All
Commentary: “Met contemplates selling art
treasures while rich trustees sit idle" Read more.
UK museum classification delays reopening
"If you can open H&M you can open the V&A" Read more.
BM hire curator to research colln history
incl contested objects eg Parthenon Marbles Read more.
NMA opens Piinpi: Contemporary Indigenous
Fashion - Bendigo AG conceived & curated Read more.
SAM, NIWA & Univs date last pole switch
via 42,000 yo kauri in ancient Ngāwhā swamp Read more.
Top +
Council of Australasian Museum Directors, c/o Ms Daryl Karp, Museum of Australian Democracy at Old Parliament House PO Box 3934 Manuka, Australian Capital Territory 2603 Australia, © CAMD 2021
Copyright: All information and resources provided on this website remain the copyright of the Council of Australasian Museum Directors. Permission is granted for viewing and downloading for personal and not for profit purposes. Those wishing to reproduce any materials for commercial, educational or other uses are requested to contact us.
Disclaimer: The content of this website is provided for information purposes only and is not intended as a substitute for professional advice. No claim is made as to the accuracy or authenticity of the content of the website. The Council of Australasian Museum Directors does not accept any liability to any person for the information or advice (or the use of such information or advice) which is provided on this website. The information on our website is provided on the basis that all persons accessing the site undertake responsibility for assessing the relevance and accuracy of its content. No responsibility is taken for any information or services which may appear on any linked web sites. Hostgator.
.