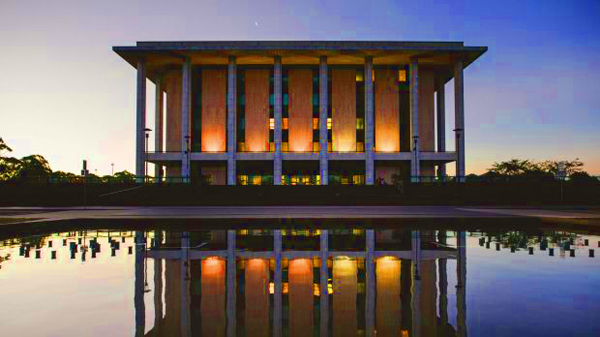 A parliamentary inquiry will look into Canberra’s national institutions, including the National Library, as they deal with the impact of cuts. Photo: Jamila Toderas.

A federal inquiry will probe Canberra’s national museum and galleries as they grapple with millions of dollars in funding cuts, forcing them to find new revenue and raising fears that government neglect could leave them forgotten.

Budget cuts hitting the ACT’s national institutions since the Coalition’s ascent to power in 2013 have been estimated at $30 million, and directors working with shrinking public funding have had to slash staff over multiple years.

The parliamentary inquiry, announced on Tuesday, is expected to investigate efforts by Australia’s national institutions to tap new, private revenue sources and find other forms of income as federal funding reduced.

Inquiry committee chair and Liberal MP Ben Morton said it was a chance for Canberra’s museum, galleries and library to take stock and look at what they needed, including support from both the public and private sector.

Mr Morton said he didn’t believe in “throwing money” at problems to solve them, but that the inquiry would look at whether museums, galleries and the National Library had the right level of funding.

“I do want to make sure that our national institutions are adequately resourced,” he said.

The committee is also expected to look at the process for establishing new national institutions, and will examine how they are governed.

Canberra Labor MP and inquiry deputy chair Gai Brodtmann said in a speech at Parliament House on Tuesday that proper funding for national institutions would retain the staff needed to preserve collections.

“We should not pretend the funding cuts to our cultural institutions are about cutting fat. They are not about cutting bone. The cuts run so deep that they are hitting vital organs,” she said.

“I welcome the opportunity for the Canberra community to participate in this inquiry and to reinforce to the committee – to this government – that it is only by properly funding our cultural institutions that we can ensure we have the exhibits and collections to share with people in Canberra, across Australia and internationally.”

Ms Brodtmann said it had been more than a decade since a review into national institutions by the Joint Committee of Public Accounts and Audit, and that the scope of its new inquiry was intended to be broad.

Community and Public Sector Union deputy secretary Beth Vincent-Pietsch said the inquiry was an opportunity to highlight the scale of the problem and to begin repairing damage caused by cuts under the Coalition.

“The CPSU conducted its own thorough review of the cultural institutions several years ago, highlighting the damage caused by years of so-called efficiency dividends, the government’s term for what in reality are savage and arbitrary cuts,” she said.

“Since then the situation has worsened considerably and we’ll be using this inquiry to highlight the short- and long-term impacts, and what needs to be done to preserve and restore the critical cultural heritage held collectively by these institutions.”

The union believed the inquiry should investigate the impact of funding cuts and the cap on staffing in agencies.

“Just as importantly, a light needs to be shone on the past and likely future damage caused,” Ms Vincent-Pietsch said.

“We believe the already terrible impacts of years of cuts will be increasingly visible to the public from now on. Exhibition spaces are closing, travelling exhibitions wound back and more than one institution have considered closing the doors some days a week in order to save money.”

In a study published last year in the Australian Journal of Public Administration, researchers from the CPSU found the federal government’s “wilful neglect” of Australia’s national museums, galleries and libraries was putting the nation’s shared history and heritage at risk.

Budget cuts had heaped pressure on staff, limited public access to collections, and put them at risk of being forgotten, it said.

One of Canberra’s national institutions continues to shed workers as it looks for savings amid budgetary pressures, as the National Archives of Australia admitted in February it would cut 40 jobs in two years as it tried to reduce its staff numbers to 320 by 2019-2020.

Canberra’s national gallery said last year it would not reverse a 10 per cent staffing cut despite a budget windfall restoring half its government funding slashed less than two years ago.

The National Gallery of Australia’s director Gerard Vaughan told senators at an estimates hearing in May it had to shed 20 of its 237 staff after a $3.94 million cut in December 2015.

The committee, which will also look at how national institutions create a brand and online presence, conduct outreach outside Canberra and experiment with new forms of public engagement, will accept written submissions until Tuesday, May 8.