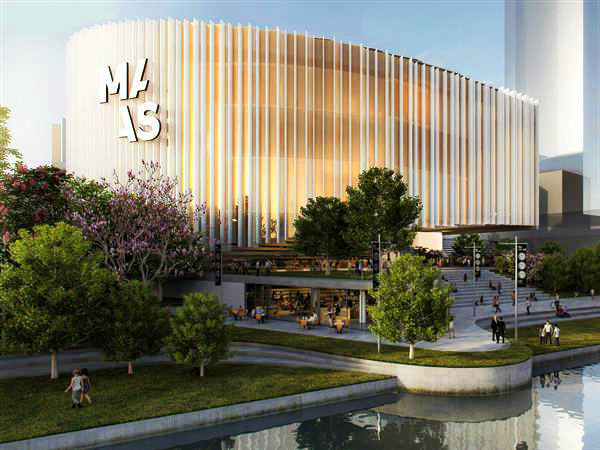 Artist’s impression of the new Powerhouse Museum in Parramatta. Image via NSW Government.

An expanded Powerhouse Museum, including Australia’s largest planetarium, will form the centrepiece of a new arts and cultural precinct on the banks of the Parramatta River in Western Sydney.

As part of the $645 million plan to move the Powerhouse from its current inner-city site, the existing Riverside Theatres complex in Parramatta will also be redeveloped, incorporating new cafes, bars and public spaces.

Announcing the news on Saturday, NSW Premier Gladys Berejiklian said the new Powerhouse Museum would ensure families in Sydney’s west have access to world-class cultural facilities on their doorstep.

‘It will be bigger and better than anything NSW has ever seen and will rival global cultural icons such as the London Science Museum and the Smithsonian Air and Space Museum,’ Berejiklian said.

The NSW opposition has criticised the plans, accusing the government of a ‘cover up’ over its failure to release the business case for the move.

Speaking to ABC Radio Sydney, NSW Shadow Arts Minister Walt Secord said, ‘This is a massive cover-up. There is a cloak of secrecy involving the Powerhouse Museum.’ The Government is spending more than a billion dollars and now they’re saying that no documents exist. This is the height of contempt and this is absolutely arrogant.’

Eighteen days ago, a majority of the Upper House of the NSW Parliament ordered the Government to provide the business case behind moving the Powerhouse to Parramatta.

Secord said this was astounding. ‘The government has refused to give any detail of the business case of this move – which could cost up to a billion dollars. Either this is a massive cover-up, or worse, there is no business case at all. This is another example of the Berejiklian government’s culture of cover-up and lack of transparency,’ he said in a statement.

The existing museum site in Ultimo will host a new design and fashion museum – suggesting a splitting of the existing collection across the two sites – as well as a new 1500-seat, Broadway-style lyric theatre.

The Australian reports that part of the Ultimo site will be sold off to developers, presumably to help finance the museum’s relocation to Parramatta. More than 100 apartments will reputedly be built on the partially re-zoned site.

The new Powerhouse Museum will be the largest museum in NSW and its relocation to Parramatta marks the first time one of NSW’s five major cultural institutions will be entirely located in Western Sydney.

Work on the new museum – which will feature 18,000 square metres of exhibition and public spaces (up from 15,708 square metres in Ultimo) in addition to a state-of-the-art planetarium and dedicated play areas and education labs devoted to science, technology, engineering, arts and mathematics – will begin in 2019. The relocated Powerhouse Museum is expected to open to visitors in 2023.

Planning for the west

Minister for the Arts, Don Harwin said the announcement was the culmination of almost three years of planning.

‘We’ve heard loud and clear that people want a major cultural institution in Western Sydney. The new Powerhouse Museum will be a spectacular drawcard for families, industry and educational institutions,’ he said.

Confirmation of the Powerhouse Museum’s relocation and redevelopment has been welcomed by Michael Dagostino, Director of Campbelltown Arts Centre.

Dagostino told ArtsHub: ‘I’m extremely supportive for a new museum in Parramatta and more investment in Western Sydney. When you consider that 95% of the arts budget is spent within a 5km radius of the harbour it is impossible to argue against an injection of $654m into the region. Over the past 40 years, Governments on both sides have built hospitals, schools and public transport in Western Sydney making it accessible to where people live. Now it’s time to invest in cultural infrastructure in the same way. It’s not just about access, but about opportunity as Western Sydney artists and arts organizations tell a uniquely Australian story that is local and resonates globally which is embraced, but needs to be funded accordingly.’

News of the redevelopment of Riverside Theatres and the construction of a new theatre in Ultimo as part of the Powerhouse move has been cautiously welcomed by Theatre Network NSW (TNN).

‘This investment in accessible, quality performance and rehearsal spaces in both Ultimo and Parramatta reflect the NSW Government’s admirable ambition to deliver on its action plan to build the NSW theatre profile globally as well as the associated goals of increased attendance, participation and excellence,’ said TNN Director, Jane Kreis.

‘However, for these and all arts venues to thrive the same level of funding and attention must be given to the soft infrastructure of the performing industries: the people, the programming, and movement of work, increasing the lifespan and audience opportunities of work,’ she added.

While the announcement of a new theatre in Ultimo has been welcomed by many, peak body Live Performance Australia (LPA) has called on the NSW Government to urgently resolve the future of the shuttered Theatre Royal in the CBD.

‘This theatre is a very valuable part of our live performance infrastructure and to have it dark for more than two years now is severely limiting opportunities for our producers, performers and audiences,’ said LPA Chief Executive, Evelyn Richardson.

She said the potential to develop a new Broadway-style Lyric theatre at the Powerhouse site was good news but noted it would still be a number of years before the venue was open to audiences.

‘Sydney has fallen way behind Melbourne when it comes to live performance venue capacity which is not only bad for Sydney but also impacts on audiences around the rest of the country. The NSW Government cannot idly stand by and allow the demolition or downgrading of existing infrastructure,’ she said.

‘The loss of the Theatre Royal has materially impacted the opportunity for Sydney to host major productions, depriving local performers and industry workers of jobs, limiting choice for audiences, and short-changing the visitor economy through lost visitation and economic activity generated by live performance.’

LPA is calling on the NSW Government to bring together the owners of the Theatre Royal site, City of Sydney and industry leaders to secure the  venue’s future.

‘Sydney is a vital part of a national touring schedule particularly for international productions. If a show can’t be booked into Sydney, that can affect the touring prospects for other Australian cities. Australian audiences are missing out on seeing great shows because there are not enough venues in Sydney to make presenting these productions viable,’ she said.

‘It doesn’t make any sense to have a perfectly good venue in the heart of the CBD sitting unused. Every day the Theatre Royal is closed is another missed opportunity for Sydney’s live performance industry and audiences and the Government should make reactivation of the site an immediate strategic priority for live performance in NSW,’ Richardson concluded.