Robin Pogrebin, The Met Goes Beyond Its Doors to Pick a Leader Who Bridges Art and Technology, New York Times, 10 April 2018 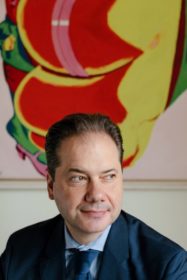 The Metropolitan Museum of Art’s new director, Max Hollein, heads the Fine Arts Museums in San Francisco and has a painting by Michael Langer, “Die Gelbrote Faust” (“The Yellow-Red Fist”), from 1967, on the wall of his home. Credit: Peter Prato for The New York Times.

For the first time in 60 years, the Metropolitan Museum of Art has reached beyond its own doors for a new leader, choosing a Vienna-born museum director who is conversant in the old masters, modern art and Minecraft to steer the venerable institution through the digital age.

The Met announced on Tuesday that Max Hollein, 48, currently the director and chief executive of the Fine Arts Museums of San Francisco and a veteran of Germany’s oldest art foundation, will become its 10th director this summer. He will take command of the Met at a time when museums are under increasing pressure to remain relevant, raise funds and attract new audiences.

“The Met is one of its kind,” Mr. Hollein said in an interview at the museum. “The museum has the opportunity to be not just an art destination,” Mr. Hollein added, but “a major provider of understanding and different narratives to a global audience.”

Unlike his recent predecessors Philippe de Montebello, who served for 31 years, and Thomas P. Campbell, who served for eight, Mr. Hollein did not ascend from the Met’s curatorial ranks. He was reportedly a runner-up when Mr. Campbell was chosen in 2008.

But he was an appealing candidate this time around for a museum seeking a stabilizing force after a period of financial turmoil. He is an aggressive fund-raiser with experience in contemporary art as well as a broader knowledge of art history, who has a track record of digital innovations.

Since age 31, Mr. Hollein has served as a museum director, including 15 years at several institutions in Frankfurt: the Städel Museum, which houses one of Europe’s important collections of old masters; the Schirn Kunsthalle, which exhibits modern and contemporary art; and the Liebieghaus, with a world-renowned sculpture collection.

At the Städel, Mr. Hollein developed a forceful digital strategy and oversaw a $69 million renovation and expansion that doubled the gallery space and created a new wing for art made since 1945. All three museums during his tenure saw record levels of attendance and added more than 2,800 artworks to their collections.

He only recently moved to the United States, in 2016, to head the Fine Arts Museums, consisting of the de Young Museum in Golden Gate Park, which specializes in American art; and the Legion of Honor near the foot of the Golden Gate Bridge, which focuses on European art.

In his two years in San Francisco, Mr. Hollein has brought significant innovations to the Fine Arts Museums, including Digital Stories, an in-depth look into the museum’s exhibitions, enhanced by multimedia experiences. The museum translated all exhibition materials into Spanish for its exhibition “Teotihuacan: City of Water, City of Fire”; created a Minecraft map of the pyramids there; and offered free online courses to help encourage access for all audiences — not only the young.

At a time when museums are making a concerted effort to expand the cultural conversation to include more women and people of color, Mr. Hollein said it was also important to him that the Met “open up” to incorporate a range of perspectives. He cited his current institution’s acquisition last year of 62 works by African-American artists, from the Souls Grown Deep Foundation in Atlanta. (The Met acquired 57 works from the foundation in 2014, some of which go on view in an exhibition that opens May 22).

Many in the art world had wondered whether the Met director job would draw first-rate candidates, given the museum’s recent reorganization of its leadership structure. Rather than governing from the top of the pyramid, like Mr. Campbell, who also served as chief executive before he was forced to step down last year, Mr. Hollein will report to Daniel H. Weiss, the president and chief executive of the Met. “We are going to be genuine partners,” Mr. Weiss said. Though both will have responsibility for fund-raising, Mr. Hollein will be in charge of the artistic side of the museum — exhibitions, acquisitions, programming — while Mr. Weiss will oversee business and operations.

Mr. Hollein’s art world peers seem to think highly of him. “Max is an excellent choice,” said Glenn D. Lowry, the director of the Museum of Modern Art. “He’s an esteemed colleague, he’s known to many of us, he’s been an interesting director for a while.”

Michael Govan, the director of the Los Angeles County Museum of Art, said Mr. Hollein “is extremely personable and he has had a tremendous amount of experience in management — both of organizations and friendships.”

Still, the selection of Mr. Hollein could lead to complaints that the Met has again chosen a white man for the top job. “This could have been a moment for the Met to take a leap into the present,” said Tom Eccles, executive director of the Center for Curatorial Studies at Bard College. “This is a moment when we’re really trying to unearth different histories, different viewpoints, new ways of thinking about geographies and identities.”

Candace K. Beinecke, a board member who led its search committee with Richard Chilton, said that “the museum’s commitment to diversity is evident in everything we do, and the search was no exception to that.”