You are here: Home » Articles filed under: 'News' » Article: 'New Museum of London' 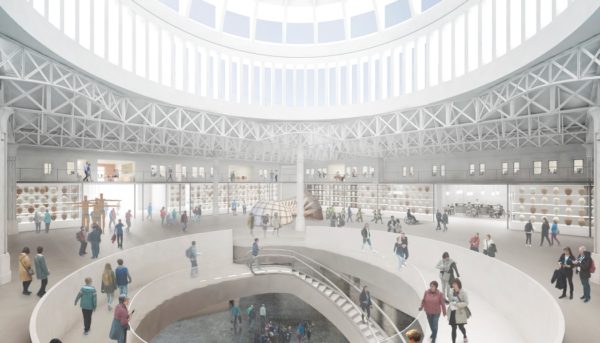 Stanton Williams and Asif Khan working together with conservation architect Julian Harrap and landscape design consultants J&L Gibbons have today been announced as the winners of the Museum of London’s international competition for the new museum at West Smithfield.

Their vision for the new 25,000 sq m Museum of London at Smithfield General Market, which includes the Fish Market, the Red House and the Engine House, ‘balances a crisp and contemporary design with a strong recognition of the physicality and power of the existing spaces of the West Smithfield site’.

With a £130-150m construction budget their early stage concept envisages a new lifted landmark dome which would create a light-filled entrance to the museum; spiral escalators transporting visitors down to the exhibition galleries in a vast excavated underground chamber, flexible spaces that can serve as a new meeting place for London and a centre for events and debate as well as a new sunken garden and green spaces to provide pockets of tranquillity.