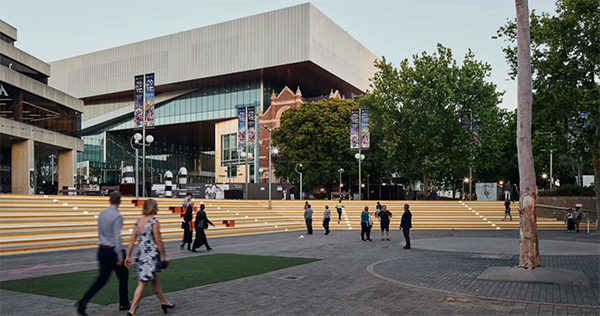 The Hassell and OMA-designed New Museum for Western Australia is cantilevered over the historic Hackett building. Peter Bennetts.

The New Museum for Western Australia brings together the old and new in a way that takes repurposing heritage buildings to new heights.

Adaptive reuse is on trend these days. As historical buildings reach their use-by date, cities around the world are reconfiguring heritage infrastructure to make it fit for new purposes.

In London, for instance, the once dangerously down-at-heel King’s Cross district now has a buzzy creative hub centred on two 19th-century Victorian coal warehouses that have been turned into a dynamic retail and entertainment precinct, anchored by The Coal Office – a hub of workshop, shop, restaurant and more by DJ-turned-designer Tom Dixon.

Vast swathes of Detroit, decimated by the collapse of the city’s motoring industry, have been transformed by savvy urbanists into a series of “20-minute neighbourhoods”, where everything is accessible by foot.

Nowhere is adaptive reuse being executed as it is in Perth, where four historical structures are rewoven into a new entity.

In Sydney’s Chippendale precinct, the former Carlton United Brewery is now a hip hotel, the Old Clare, and the dilapidated workers’ housing has been transformed into a hive of niche eateries.

But nowhere is adaptive reuse being executed quite as it is in Perth, where the New Museum for Western Australia has been conjured up from a collection of four historical brick structures rewoven into a new angular glass and metal entity that cantilevers dramatically above the cultural precinct, north of the Swan River. 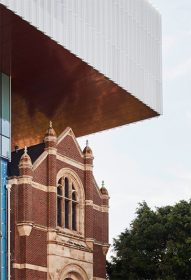 The museum takes up a city block with three corners occupied by red-brick heritage structures in the Federation Romanesque style. Supplied.

Orchestrated by Rem Koolhaas’ Office for Metropolitan Architecture (OMA) in Rotterdam in tandem with Hassell (founded in Adelaide in 1938, and now with offices around the world), the new museum is composed as a series of interlocking blocky volumes which effectively link up the 19th-century Perth Gaol and Jubilee buildings with the Art Gallery and State Library of Western Australia, completed in 1908 and 1913 respectively.

Let’s call it extreme upcycling for the design-savvy 21st century.

In essence, the New Museum for Western Australia is a whole city block of which three corners are occupied by red-brick heritage structures in variations of the Federation Romanesque style, spanned by a sleek new geometric edifice that descends to create the fourth corner. The rather stoic Georgian jail building sits within the newly formed courtyard – or “City Room” as it’s now known – which is left open at one end so that the public can come and go freely in what is effectively a new town square.

For all its apparent complexity, the new museum can be navigated almost intuitively. A gold seam running through it (a nod to the museum’s first specimen: a block of quartz encasing a gold lode) denotes public walkways. The subtle narrowing of one long, tall promenade creates a false sense of perspective, leading the eye (and feet) towards a chamber of the Beaufort wing, home of the state’s original art gallery. Three spiral staircases made from glimmering brass pivot visitors between old and new sections.

The elaborate plaster ceiling of the timber-beamed library has been spliced off and raised, allowing light to penetrate and views into the exhibition space below, which now houses one of the museum’s prize exhibits: the 24-metre-long skeleton of a blue whale that washed ashore at the mouth of the Vasse River in 1898.

“We’ve kept the public spaces quite bright and easy to navigate,” says Mark Loughnan of Hassell’s Perth office, in contrast with the new-build exhibition spaces, which tend to be dark, and old spaces converted into galleries, which veer to the ornate.

He also points out that in essence the new build is composed of two circuits – one vertical, the other horizontal – that facilitate intuitive navigation of the interior. In effect, the architecture acts like a centrifuge, drawing visitors in and syphoning them through the various compartments. 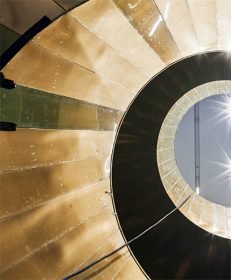 From the outside, the rigorous geometry of the new build variously frames and intersects the historical structures, at once coddling and bringing them into relief. Aligned to the city grid, the new structure knits what is now Perth’s single most prestigious cultural asset into the fabric of the city.

When the New Museum for Western Australia opens in November it will house the state’s most important archeological, geological, biological and astrophysical collections, to name but a few of the categories into which its estimated 8 million artefacts can be organised. These traditional taxonomies are being flipped a bit, though, with the organisation of the permanent galleries along the lines of Origins, Reflections, Innovations and so forth.

The ground-floor gallery, named Ngalang Koort Boodja Wim – meaning “Our Heart, Our Country, Our Spirit” – gives onto the wider cultural precinct, which includes the brutalist-style Art Gallery of Western Australia.

The architecture, conceived as “a collection of stories”, is the embodiment of this new ethos of openness and community.

“The building goes from the grandiose to the human-scaled, from big urban gesture to a sense of civic spirit,” says Paul Jones, OMA’s Brisbane-based director. “The fusion of our global perspective and a strong connection to Australia has allowed us to explore a type of architecture with both international and local relevance.

Indeed, this system of superposing a gleaming new structure on a historical one forms the backbone of Zaha Hadid’s refurbishment of the old Port Authority Building in Antwerp, completed in 2016. It’s also the organisational logic of Herzog & de Meuron’s Elbe Philharmonic Hall, in Hamburg, opened the same year. And of Sir Norman Foster’s DUO tower, which looms over a Federation-era pub on Broadway, Sydney (2018). 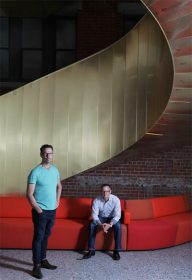 Peter Jones of OMA with Mark Loughnan of Hassell at the intersection of old and new. Peter Bennett.

A view of the Perth skyline from between the brass-lined cantliever of the new museum and the historic structures of the cultural precinct. Peter Bennett

Which is a doubly wonderful achievement when you consider that the architects of these historical buildings – the era’s starchitects George Temple-Poole, John Grainger and Hillson Beasley – were notoriously competitive. To the point where they apparently designed their neighbouring buildings along different elevations so that movement between them was frustrated.

“The story might be apocryphal,” admits Alec Coles, chief executive of the Western Australian Museum, “but either way I can tell you it was extremely difficult to get from one end of the site to the other. Now, from level one, you can go all the way around – not only with ease but with great pleasure.”

“We have deliberately designed it to be as flexible, adaptable and supple as possible,” says Jones. “Our hope is that it will have a long, productive life.”

The New Museum for Western Australia opens in November.