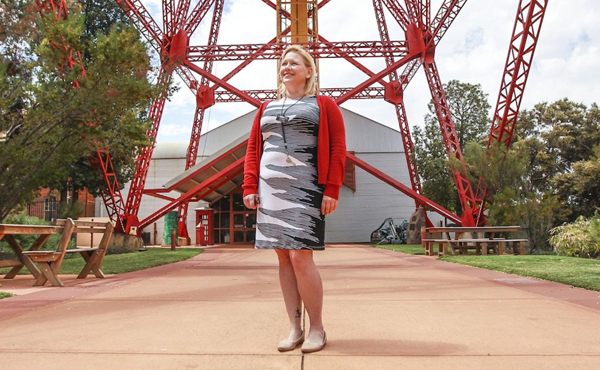 Cara Haymes has taken on the role of the WA Museum of the Goldfields’ new regional manager. Picture: Kelsey Reid / Kalgoorlie Miner.

Cara Haymes has been involved with the Museum of the Goldfields as operations manager since she arrived in Kalgoorlie in 2012.

She has taken over as the museum’s manager since Ms Scott retired from the role earlier this year.

“I was really excited to get the role, it’s nice to be able to stay and help this museum grow and evolve,” she said.

“I think the museum has been constantly growing and become deeply ingrained in the community.

“I think that’s such a positive thing in a regional area.”

Stepping into the role, she said Ms Scott had done a great job in assisting the museum’s development and she wanted to continue its growth.

“Zoe brought a lot of curatorial skills to the position that really assisted in helping the museum develop,” she said.

“I think the museum has an opportunity to be an absolute hub and heart of the community and have its doors open for community events.

“We’ll continue our outreach and develop stronger educational programs and our commitment to the community.”

Before her career with the museum, Ms Haymes worked with antiquarian books in New South Wales at shops in Surrey Hills, Double Bay and the Hunter Valley.

“I worked with antique books, so anything over 100 years old,” she said.

“We dealt with really rare books like early exploration, medical and technical books so these skills were quite transferable to a career in museums.” Throughout her career she has also run successful Statewide WA Day events.

“Bringing those event management skills up to the manager’s position will be incredibly helpful,” she said. Ms Haymes said the museum would work with the City of Kalgoorlie-Boulder for the Santa Grotto later this year for the tree lighting ceremony.

“This year we’re also looking at doing a sensitive Santa time in that space for kids with autism,” she said.