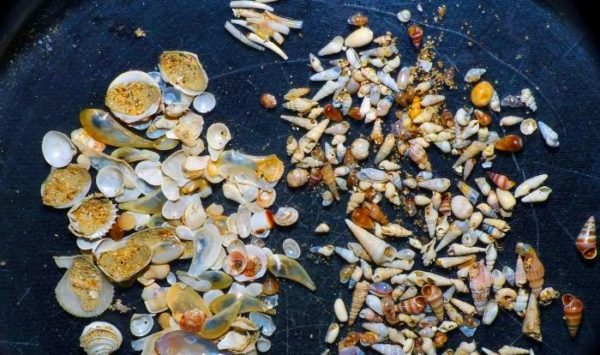 More than 400 shell species have been found living off the Tasmanian coast near Port Arthur and researchers suspect there is more to be found.

Dr Simon Grove, senior curator of invertebrate zoology with the Tasmanian Museum and Art Gallery, and Rob de Little have been pulling up thousands upon thousands of shells over recent months, as part of ongoing research into the area.

“It’s very rare that we get the chance to explore what’s living beyond the tide line.

“We haven’t tallied up the number of species completely, but it’s going to be about 400 different shell species.”

Dr Grove said the last formal survey in the area was done by local businessman William Lewis May in the early 1900s.

Mr May was an apple exporter who spent most of his spare time dredging the waters of the Tasman Peninsula.

“He teamed up with Charles Hedley from the Australian Museum to go out dredging with a steamer,” Dr Grove said.

“They dredged off Cape Pillar and a couple of other places, and he added 80 species to the Tasmanian list at the time.”