Gwen Flanders, New Smithsonian head urges emphasis on arts and humanities, but not at expense of science, The National Press Club, 8 December 2015 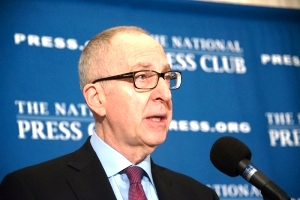 David Skorton, the new secretary of the Smithsonian Institution, made it clear Tuesday that he sees his organization’s mission in broad terms.

In a National Press Club luncheon address, Skorton talked about the need for a community to agree on values in order to solve society’s problems.

Skorton, 66, who took the helm of the Smithsonian on July 1 after a career as a cardiologist and educator led him most recently to the presidency of Cornell University, noted the emphasis by schools and governments on science, technology, engineering and math, an emphasis he said has come at the expense of the humanities.

“To understand what it means to be human and to understand the complex problems that the world now faces require us to deploy every technique of understanding at our disposal, including and especially those at the heart of the visual and performing arts, social sciences and cultural studies,” Skorton said.

“Our national security alone would benefit if we all shared a better understanding of different religions, languages, philosophies and world history.”

Museums are well-positioned for the mission, he said. He cited a program by the Smithsonian’s National Museum of American History, which brought together noted philanthropists Warren Buffett, Bill Gates and David Rockefeller Jr. to hear about activists working through Baltimore’s Enoch Pratt Free Library on poverty, alienated youth and other social problems.