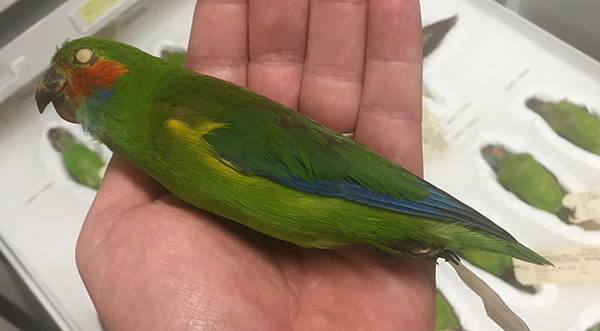 In a quiet corner of the Queensland Museum, behind the public galleries and displays, six small dumpy green parrots sit in a special drawer. These are among the last known specimens of Coxen’s Fig Parrots. They were collected well over half a century ago before populations of this species precipitously declined—possibly to extinction. Years later, they’re now helping us understand more about this rare bird. 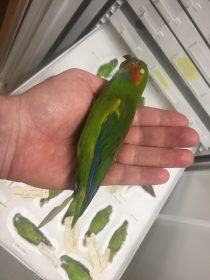 These specimens of Coxen’s Fig Parrots were collected over 50 years ago. We’re studying their genetic data to reveal the history of this beautiful bird. Image: Paul Oliver.

Coxen’s Fig Parrots are rapid-flying little birds that once occurred in lowland rainforests extending from Bundaberg all the way down the New South Wales – Queensland border. While most bird species associated with these rainforests remain relatively common, Coxen’s Fig Parrots have declined precipitously in the last 50 years. 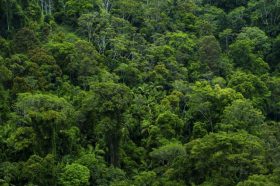 As part of broader project to understand the history of birds in Queensland’s subtropical rainforest we have recently obtained DNA data from two of our fig parrots. Techniques perfected by our collaborator Dr Kieren Mitchell have allowed us to sequence the whole mitchondrial genome of this species from a tiny fragment of toepad skin. It is quite wonderful to think that are obtaining DNA from specimens collected decades before DNA was even the germ of idea in the heads of scientists.

These new genetic data help us to understand the history of Coxen’s Fig Parrot. It appears to be a recent colonist of the subtropics, having diverged from its nearest relative the Macleay;s Fig Parrot from tropical Queensland within the last 1 million years. In that short (evolutionary) time it evolved a larger size and much plainer pattern than its northern relatives. Birds often evolve large body size as an adaption to cooler climates. This and the loss of energetically expensive bright colouration point to a tropical bird that was persisting the subtropics, but was at the limit of its climatic tolerance. 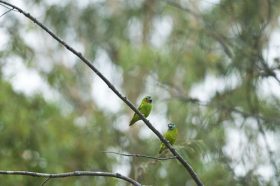 And in the last 100 years widespread destruction of lowland rainforest has clearly tipped balance and sent these beautiful little birds towards the edge of extinction. They are now either perilously rare, or extinct. Large bushfires recently burnt many areas of potentially suitable remnant habitat. If there are still Coxen’s Fig Parrots out there, their best hope for survival is re-establishment and protection of regenerating lowland subtropical rainforests.

More broadly this study highlights the value of museum collections. Using techniques that have only been developing in the last decade, we have been able to use two old museum specimens to shed new light on the evolution of one of Australia’s rarest birds.

An untold number of further stories await discovery in the thousands of other specimens we hold.

This research is supported by Project DIG, a partnership between Queensland Museum Network and BHP to share our State Collection and research with communities worldwide.