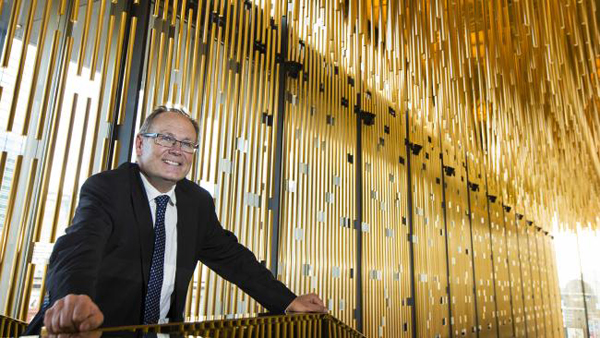 Western Australia’s new Arts Minister, David Templeman, has two things that set him apart from almost all his predecessors: he lobbied to win the portfolio and he is a thespian of 20 years’ experience.

He also has a lively sense of humour. Tongue firmly planted in cheek, he describes his acting ability as “outstanding”, his singing skills as “world class, as judged by me”. As a politician, he says, he makes a very good actor.

In fact Templeman has more political experience behind him than many of his Labor colleagues who were swept into power on March 11. Templeman is WA’s Local Government, Heritage, Culture and the Arts Minister. In a former Labor government that held power until defeat in 2008, he was shuffled between the community development, seniors and volunteering, youth, child protection, environment and climate change portfolios.

The arts portfolio eluded him the last time, so when Labor was returned to office last month he asked incoming leader Mark McGowan for the job.

Those credentials lie in community theatre and charity concert performances across many years. He keeps an oversized set of false teeth to entertain audiences in vaudeville-type comedy acts, “although I prefer to call them fake teeth because I do have my real teeth in my head”.

Trained as a drama specialist for primary schools, Templeman worked as a teacher and sat on the local council in Mandurah, the large seaside community an hour’s drive south of Perth that he now represents as a state MP.

His performing career has fitted in between work since he and a musician friend formed the Halls Head Hippies in the late 1990s. Then there’s the David Templeman Show, a glorified name for the annual Christmas variety concert staged by him and a bunch of friends.

The antics have a serious side. Templeman uses the concert takings to fund a fellowship in memory of a cherished community theatre stalwart in Mandurah. One recipient is in Switzerland studying ballet with a top company there.

The 52-year-old father of four — Jack, 9, who often joins him on stage, seven-year-old twins and a five-year-old — is a strong supporter of grassroots theatre.

“Theatre has played an important role in the development of Mandurah and small theatre groups should be encouraged,” he says. “One of the things I’m keen to do is promote the importance of community theatre because we have well-established companies that are tremendous training grounds.”

A bigger issue is the progress of the new $428 million Western Australian Museum, for which the state’s citizens have waited for more than two decades. McGowan’s new government is caught in the vice-like grip of a mining downturn and a projected $40 billion state deficit by 2018-19, so there was a frisson of concern that key arts projects such as the museum might be relieved of funding.

“It’s a very important project and I hope to play a key role in steering it forward,” Templeman says, although he adds that the state’s economic circumstances are challenging. “We’re reaching the end of the first stage of museum planning and I need another briefing, but my understanding is it will pro­gress as programmed, within the budget forecasts.”

Other issues on his radar include solving the problem of a new home for the West Australian Symphony Orchestra, a search that patron Janet Holmes a Court has long pushed with both sides of government.

“There’s also the writing sector that I think suffered under the previous government,” says Templeman. He alludes to the WA Premier’s Book Award — which was cut in half to a biennial event by former premier Colin Barnett — and a departmental review of WA’s writing sector.

There’s also the controversial withdrawal of funds for Writing WA, the peak body, which so far has won only a temporary reprieve. “I want to look at how we rebuild the writing sector into the cultural life of Western Australia,” Templeman says.

Labor’s electoral promises to the arts were hardly numerous, but Templeman says the government will honour a $10m promise to refurbish a portion of the Art Gallery of Western Australia.

Given he has held a swag of portfolios, he’s keen to exploit the cultural opportunities he sees in other sectors such as local government. “Having the two portfolios under the one minister, me, is a good synergy,” he says. He doesn’t propose to tamper with regional arts endeavours such as Country Arts WA or their dependence on Royalties for Regions funds.

Templeman talks about boosting jobs in the arts sector. He could be chan­nelling the message of the WA Chamber of Arts and Culture, with which he met last week.

The chamber argues that the cultural sector contributes $10.6bn to the state economy and employs 42,000 people, but the creative workforce in WA is less than the national average of 5.29 per cent.

“With the right support, the arts can make a significantly greater contribution in the areas of cultural tourism, the creative economy and vibrant community building required throughout this state,” chamber chairwoman Helen Cook says.

“A vibrant arts community and a series of festivals are a great tourism incentive,” he says.

Boorna Waanginy, a sound and light show projected on to trees in Kings Park, as part of the Perth Festival, was a good example of an arts-based tourist drawcard.

“Aboriginal culture is one of WA’s great underrated res­ources. We have the oldest living culture — why wouldn’t we celebrate that?” Templeman says.

He says being Arts Minister is “a dream job”, although he admits he has more to learn about ballet and opera. He was seen at His Majesty’s Theatre attending the opening night of West Australian Opera’s production of Tosca.

He says he wants to meet Perth’s philanthropic leaders with an interest in arts and heritage.

“Those people can offer a lot in how we continue to broaden the understanding of arts and culture as an element of our humanity,” he says. “I haven’t got a mortgage on all the good ideas.”

But as the minister for fake teeth, he has a monopoly so far.