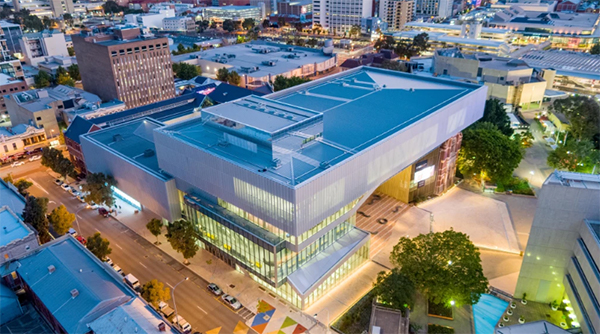 Western Australia’s new $396 million museum altered a digital exhibit about China and COVID-19 after complaints from the Chinese community and consul-general, who insisted the origin of the virus was not yet known.

A digital exhibit in the WA Museum Boola Bardip‘s ‘Connections’ gallery described COVID-19 as “a coronavirus originating in mainland China” in a pop-up about the year 2020.

According to the World Health Organisation, the first reported COVID-19 cases came from Wuhan in China’s Hubei province, but WHO scientists are yet to officially declare the virus originated in China.

Tensions with China rapidly escalated in May after Prime Minister Scott Morrison called for an independent investigation into the origins of the pandemic. A team of 10 scientists, including Australians, are readying to travel to Wuhan for the investigation.

The same museum exhibit also featured an interactive world map that lit up countries when selected by the user, however, Taiwan did not light up when China was selected.

The exhibit incensed Ms Zhang, who claimed the museum was misleading the public.

“The World Health Organisation, governments, and relevant departments of various countries have yet to confirm the origin of the coronavirus,” she wrote.

“Taiwan is an inalienable part of the People’s Republic of China. This has been recognised by the international community.

“As an official institution that imparts knowledge and information, the WA Museum should present the most accurate information to the general public in Western Australia, rather than misleading the public or even splitting China.”

In a response to Ms Zhang, WA Museum chief executive Alec Coles apologised for the “inaccuracies”, labelling them an innocent mistake, and assured her the map would be fixed and the COVID-19 label immediately changed.

On Thursday, Mr Coles confirmed he had received letters from both the consul-general and Ms Zhang but said the decision to change the exhibit was the result of wanting to get the facts right and not due to “political pressure”.

“The suggestion that’s given that there was, shall we say, coercion from the consul-general is actually the opposite, they drew our attention to it and we then looked at it,” he said.

“Those two elements were literally factual errors that we were very happy to correct.

“It may turn out at some point that people will conclude where the origin of the virus was but at this stage, we were jumping the gun.

“I’m sure people will pick up other things in the museum as we go along, which is good because then we’d get them right. I know we got the wrong number of medals for an AFL player, which we have also corrected since then.”

In a statement, the consul-general thanked the museum for the “remarkably responsible and efficient” response.

“We are fully convinced that, as the hub of WA’s culture and history, the museum will continue functioning as a bridge channelling understanding and affinity between China and WA people and adding to the momentum of developing China-WA long-term friendship,” the statement read.

WA Treasurer Ben Wyatt said the issue of Taiwan had always been one of contention. He suspected similar turbulence around these sorts of issues wouldn’t disappear quickly.

“I don’t think the position originally adopted by the museum is particularly controversial but I suspect the museum takes into account a range of different things when they make these decisions and no doubt they did in this scenario as well,” Mr Wyatt said.

WA Premier Mark McGowan said the decision to change the exhibits was the museum’s.

In February, the WA State Theatre Centre apologised to the Chinese government after a Taiwanese dance troupe hired its facilities and raised a flag that “did not align with the Commonwealth’s one-China policy.”

“This fits a pattern of behaviour by China around the world. We saw this in France, where two months ago Chinese officials attempted to change and rewrite elements of an exhibition on Mongolian history and to blacklist certain words,” Ms McNeill said.

“It’s very important that our cultural institutions rely on accuracy and facts and don’t bow to pressure from the Chinese Communist Party who are often trying to censor and rewrite history.”