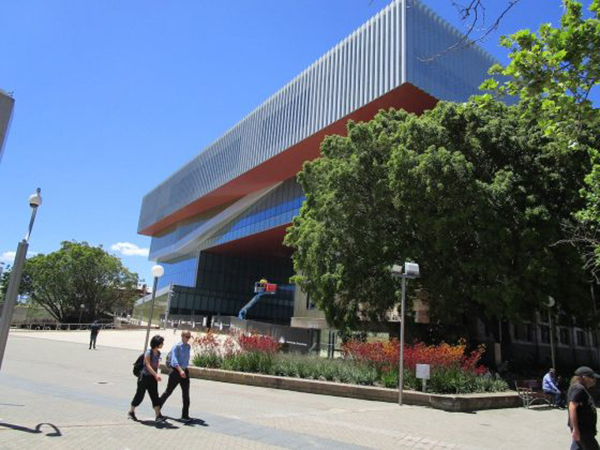 Have a Go News’ Lee Tate was escorted by WA Museum CEO Alec Coles on a guided tour of the renovated space as we herald the much-anticipated opening of the museum on 21 November.

Perth’s spectacular WA Museum Boola Bardip, magically weaves and blends the many cultural and historical ingredients of a State that is unique in the world.

Boola Bardip means ‘many stories’ in the Noongar language and perfectly fits what this phenomenal project has achieved after four challenging and fruitful years.

The museum planners and specialists have cleverly side-stepped worldwide practices of past exhibitions where aspects of nature, culture and history are segmented; seemingly unconnected.

A walk through the $400 million museum’s eight galleries brings alive Western Australia’s unique cultural, scientific and natural history collections from the formation of the universe to extinct dinosaurs, Indigenous life, species found nowhere else on the planet and inventions.

Museum CEO Alec Coles and his expert team have brought it all together so that it flows naturally through massive museum expanses, beneath high ceilings with extensive, uncluttered, displays.

“We wanted to develop a people’s museum with all aspects of Western Australia, a place we live in and the people we live with,” said British-born Mr Coles, who brought his museum mastery to WA 10 years ago and happily became an Aussie citizen.

“When I decided to come to this wonderful State, to this amazing place, it was with my total commitment,” he told me during our tour of inspection, wearing hardhats and shoe coverings.

“This is just such a unique place on earth and the museum is in this fantastic location in Perth’s cultural centre with the WA Art Gallery, State Library and PICA. It is close to bus, train and parking stations.”

The reborn museum sits on the same site it has occupied since its beginnings in 1891 as the Geological Museum in the Old Perth Gaol. The new building, dividing local architects as ground-breaking ventures inevitably do, is jaw-dropping in its proportions.

Mr Coles believes the museum is of world-wide significance, already attracting strong overseas and interstate attention. A flood of local visitors is assured.

“WE WANTED TO DEVELOP A PEOPLE’S MUSEUM WITH ALL ASPECTS OF WESTERN AUSTRALIA, A PLACE WE LIVE IN AND THE PEOPLE WE LIVE WITH.”

Inside its doors, the museum’s audacious achievements will wow kids, parents, grandparents, teachers, and all visitors. Most of our showpieces can be seen nowhere else in the world.

Incredibly, palaeontologists from the museum and the University of Queensland worked with a specialist palaeoartist in Russia to create a highly-detailed, digital 3D, life-size model of a giant sauropod, just from the footprints it left in muddy sand at the Dampier Peninsula 130 million years ago. From these, experts could estimate the beast’s dimensions.

Four metres high and 16 metres long, the long-necked sauropod wandering across our landscape would have weighed 13 tonnes, the largest land animal that ever lived.

Suspended from the ceiling is an old museum favourite, the skeleton of Otto the blue whale, washed ashore in the late 1890s near the mouth of the Vasse River. Blue whales, still trekking WA’s coast, are the world’s biggest-ever animals.

Most frightening is the constructed head of a megalodon shark, the biggest-ever shark, up to 20 metres long, weighing 70 tonnes, thankfully becoming extinct about 3.5 million years ago.

The head is modelled from a giant tooth, 10 million years old, found near Exmouth. The tooth is displayed alongside the enormous head.

The Gogo fish, WA’s fossil emblem and interpretations of other extinct marine reptiles are displayed.

Aboriginal stories are woven throughout and there is a dedicated gallery of Indigenous materials and experiences.

The Boola Bardip name recognises that the museum sits on Whadjuk Noongar land and honours the cultural heritage of Australia’s First Peoples.

The name Boola Bardip was chosen in consultation with the WA Museum Aboriginal Advisory Committee and the museum’s Whadjuk Content Working Group. It was translated and approved by the Noongar Boodjar Aboriginal Language Centre.

A wonderful, rusting ute brought down from the north-west carries artwork relating to land title and other Aboriginal messages. 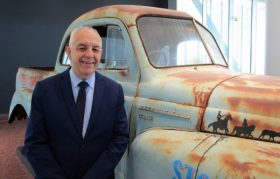 Alec Coles in front of the artwork “We worked for rations, graphics & Stolen Land” (a salvaged 1954 International AR 110 Truck, re-worked by Reko Rennie.)

Touch-screens provide insight on displays and information can be downloaded to visitors’ phones. Teachers can book student tours or, for a fee, engage museum facilitators.

The museum will be free for at least 18 months but will be busy after its 21 November opening with 50,000 invited public guests, chosen by ballot, and nine-day opening celebrations. COVID-19 restrictions of course still apply.

As well as permanent displays, a 1,000m2 space is set aside for visiting exhibitions.

The building is a triumph for international architect consortium Hassell + OMA and builders Multiplex.

“You won’t get through everything in two hours, in fact you’ll need more than a day. But you’ll get a taste of what’s on offer and you can plan your return visit to explore at your leisure.”