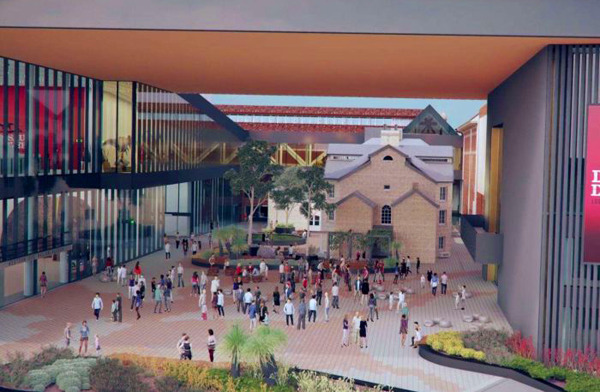 The building is expected to be complete in 2020. Supplied: WA Government

The State Government has unveiled an animated video flythrough of the new Museum of Western Australia, revealing the most complete picture yet of what visitors can expect when the venue opens in 2020.

While the site is still under construction, the Government hopes the finished space will grow to become a tourism drawcard for national and international visitors.

The Government has revised down the cost of the project from $428 million to $395.9 million, after removing a planned basement exhibition space.

The museum is about 30 per cent complete, with work expected to finish in 2020.

The new animation takes viewers through the building, including exhibition galleries and the famed blue whale skeleton.

Culture and the Arts Minister David Templeman said it was an important project for the state.

“The people who live here, the people who built this state, and of course our rich Indigenous history that flows through the themes of all of these galleries.

“We recognise that under tough economic circumstances, this project still needed to be built. This is important for us as we go forward.

“We’ve got those magnificent structures like the old jail and Hackett Hall. Those components have been very carefully married into the total new design.”

The project has reached a milestone, with construction now completed at its highest point, five storeys.

“We’ve had a few thousand workers on this site over the project’s life, 170 workers at this point in time, and we’ve just concluded the final pour of the concrete flooring on the fifth level,” Mr Templeman said.

“Tourist visitors to the museum’s unique collections would be staying longer and spending more in WA, which will create jobs in retail, hospitality and accommodation,” he said.

“The animated video shows what an exciting experience the museum will offer locals and visitors.”

The revamped Perth Cultural Centre will also incorporate about 1,000 square metres of commercial space for lease, with the Government calling for expressions of interest from food and creative businesses.