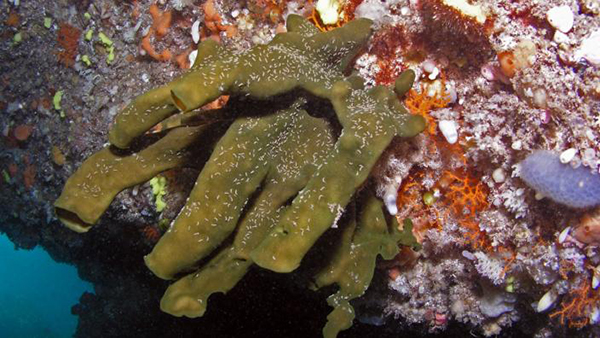 On The Science Show with Robyn Williams

They might appear to be doing nothing, but sponge specialist at the Western Australian Museum, Jane Fromont says sponges are always busy. There’s a lot happening, be it feeding, reproducing or laying down material for their glass swords. Jane describes two groups of sponges from very different environments. There’s the sponges of the deep sea canyons off the Western Australian coast. They are found at depths of 4,000m, where there is enormous pressure, it is cold, dark, and rather unchanging. These amazing creatures, known as the glass sponges filter bacteria from the water and produce a glass skeleton, including a single glass spicule which anchors them to the sea bed. Jane Fromont describes their filtering of bacteria as a great asset for the ocean.

Then there the sponges of the shallow waters. These are the demosponges. These animals cycle essential nutrients such as phosphorus, calcium and nitrogen. And they are used by humpback whales in what is thought to be courtship behaviour. The humpbacks can often be seen with sponges on their nose or rostrum presumably to attract females.

Sponges will be a major exhibit at the newly developed Western Australian Museum which will open towards the end of 2020.