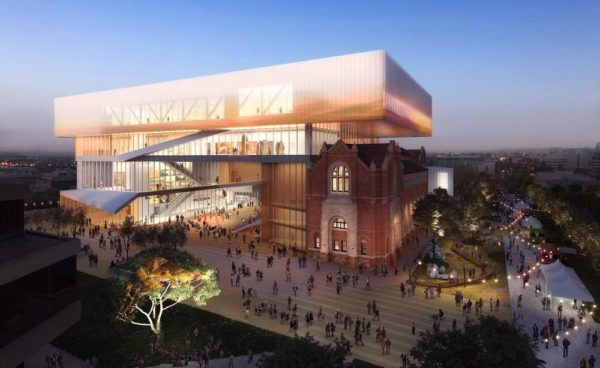 Taxpayers can now see what their new WA Museum will look like in 2020 after Premier Colin Barnett unveiled the design for the $428.3 million complex today.

Work is expected to start later this year on the final major project of the State Government’s “big picture” infrastructure plan before the March election.

A spectacular cantilevered top-floor gallery will appear to hover above Hackett Hall and span a 2000sqm public courtyard and main entrance on Museum Street opposite the State Library.

The “permeable” facility has entrances on all four sides and provides simultaneous views of the collections and the Perth cityscape from circulation routes within the glass-clad building.

Exhibition space will be more than tripled to nearly 7000sqm, with one gallery sunk into the ground and a single 1000sqm space devoted to blockbuster exhibitions.

There will also be education studios, viewing areas to see scientists and curators at work, and retail, food and beverage outlets.