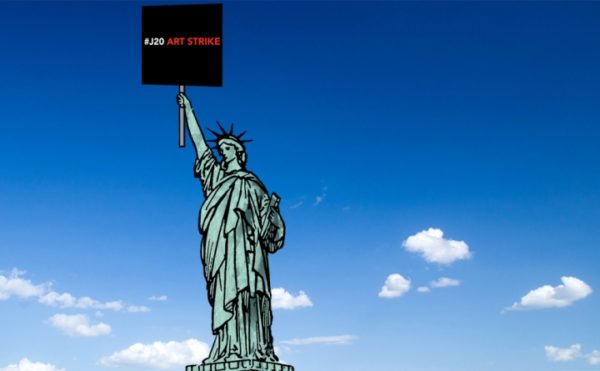 As the day of Donald Trump’s inauguration nears, we’re keeping track of all the New York City art spaces that will stay closed in protest.

The #J20 Art Strike is imminent and we’ve compiled a running list of spaces that will be closing for Inauguration Day. The Art Strike is intended as an act of solidarity with the broader slate of #J20 events and, as the movement’s site puts it, as a

tactic among others to combat the normalization of Trumpism — a toxic mix of white supremacy, misogyny, xenophobia, militarism, and oligarchic rule. Like any tactic, it is not an end in itself, but rather an intervention that will ramify into the future. It is not a strike against art, theater, or any other cultural form. It is an invitation to motivate these activities anew, to reimagine these spaces as places where resistant forms of thinking, seeing, feeling, and acting can be produced. Since there are thousands of spaces across the country, we decided to start local and contact New York-area galleries and art nonprofits to see which would be closing — museums will be listed in a separate post. Below this list is another listing of those spaces organizing special programming for January 20, the day of President-elect Donald Trump’s inauguration.

“A.I.R. will be closed on Friday, January 20th and Saturday, January 21st for the Women’s March.” — Jacqueline Ferrante, Director of Fellowship | Associate Director

In recognition of the J20 Strike, The Elizabeth Foundation for the Arts will host no events on January 20. Instead, EFA will join the Queens Museum to instruct and assist in risograph printing for their “Sign of the Times: Sign Making in Solidarity” afternoon of graphic materials production.

“In solidarity with many other NY galleries, the exhibiting artist at First Street Gallery will not open on Friday, Jan 20th, Inauguration Day. Thanks again” —Tracy Collamore

“Please add FiveMyles to the list of galleries closed on Inauguration Day.”

“In solidarity with the calls for a #J20ARTSTRIKE, No Longer Empty will be spending time outside the office on January 20th strategizing to support youth leadership during these uncertain times. We will also be hitting the streets to support student walk-outs, benefits for civil rights organizations, and protests across our city.” —Rachel Gugelberger, Curator & Director of NLE Curatorial Lab

“ODETTA will be closed on Inauguration Day in solidarity with the J20 Art Strike. The gallery will be open on Sat the 21st with artist John Morton keeping our normal hours 1-6 while Director Ellen Fagan marches in NYC.” — Ellen Fagan