These cap and collar badges are from the 5th Mounted Rifles (Otago Hussars), which were formed in 1911 from various mounted Volunteer units in Dunedin and North Otago. Gift of the Defence Department, 1916. Te Papa.

Claire Regnault, Why Gallipoli? Join us for an enduring conversation, Te Papa Blog, 12 May 2015 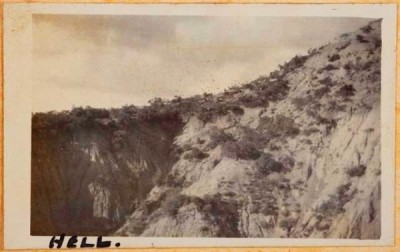 Captain John Rose did not mince words when describing Gallipoli. This image is from an album of 243 photographs taken by Captain (later Major) John Murray Rose, who sailed from New Zealand in 1914 with the Main Body of the New Zealand Expeditionary Force. Te Papa (O.040570), Purchased 2013.

I have been an avid listener of the BBC World Service’s wonderful series on the War that Changed the World, which is being broadcast locally by Radio New Zealand. Working in partnership with the British Council, the BBC has recorded a series of panel discussions in different cities around the world from Sarajevo to Dresden to Istanbul, to reveal a range of cultural views on the longterm legacy of the First World War. The latest programme was recorded in Sydney, and broadcast here on Sunday. For 55 minutes presenter Razia Iqbal and an Australian panel and audience debated the role the ‘legend of Anzac’ has played in Australia since the first Anzac Day. New Zealand was represented by a lone voice in the audience!

This Thursday evening (14 May) at 6pm, however, New Zealanders will get more of say on the significance of the Gallipoli campaign and the Anzac legend in a lively panel discussion at Te Papa facilitated by Radio New Zealand’s indomitable Kim Hill. Our panelists will include historians Dr Christopher Pugsley, Dr Gavin McLean and Seán Brosnahan. Their subject: Why Gallipoli? Why does it loom so large in the imagination of Australians and New Zealanders? What are the realities and the myths?

Dr Chris Pugsley is a military historian, and has written several histories on New Zealand’s participation in the First World War. His research on New Zealanders at Gallipoli is critically regarded as seminal. He was the Historical Director on Te Papa and Weta Workshop’s new exhibition, Gallipoli: The Scale of Our War.

Seán Brosnahan is the curator of Dunedin’s Great War exhibition at Toitu. He has been particularly interested in the experiences of the Otago Infantry Battalion and Otago Mounted Rifles during the First World War. In the lead up to the exhibition, Sean embarked on a journey to follow in the footsteps of these Otago men. Like many visitors to Gallipoli, Seán admits to having become somewhat obsessed with the failed campaign: “The story is just so compelling I can’t seem to let it go.”

Dr Gavin McLean is a Senior Historian at the Ministry for Culture and Heritage. He is the author of The White Ships: New Zealand’s First World War Hospital Ships, which includes the SS Maheno, the hospital ship that carried casualties from Gallipoli for three months. He is currently co-editing The Penguin Book of New Zealand War Writing with Harry Ricketts, and authoring a history of New Zealand’s wider war at sea.

With such a line-up, and Kim Hill at the helm, the evening promises to deliver a rich and robust discussion. As audience members, you are of course encouraged to come along armed with questions. As this session is being recorded you will need to be seated in Soundings Theatre by 5.45pm. Admission is FREE.

This panel discussion is being presented in conjunction with the exhibition Gallipoli: The Scale of Our War.