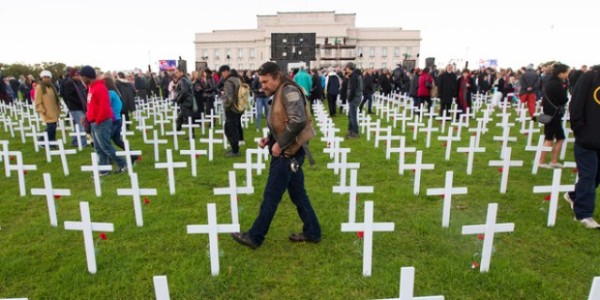 Sophie Ryan, We will remember them: New Zealanders gather for Anzac Day, 25 April 2015

Dawn services around the country saw record numbers of attendees as the significance of the centenary anniversary gave people an added reason to leave their warm beds at an early hour to attend services.

The largest crowd in the country attended the 76th annual Dawn Service at the Auckland War Memorial Museum.

As the first light of Anzac Day illuminated the cenotaph at the memorial, and the New Zealand, Australian and the Union Jack flags were lowered to half-mast, the crowd of thousands of Aucklanders was silent.

Among the sea of people paying their respects were youngsters experiencing the early morning rise and sombre service for the first time.

The service began with a rousing performance by the Auckland Pipe Band, with bagpipes bringing tears to the eyes of many in the crowd.

Veterans and current members of the Defence and other national services were piped on to the Court of Honour at the Auckland War memorial, around which thousands of people stood in respectful silence, honouring their service and remembering those no longer with us.

The morning was cold in Auckland, with temperatures in the early-teens and a light breeze that rippled the flags on the cenotaph.