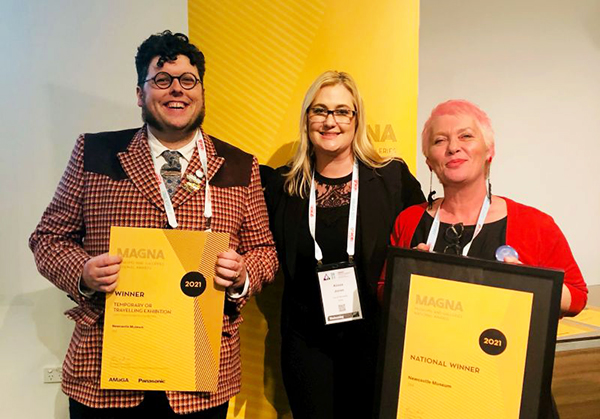 Newcastle Museum has beaten some of the most prestigious cultural institutions across the country to earn the industry’s highest national accolade, the National MAGNA.

The innovative social history exhibition, 1X4, which was curated from Newcastle Museum’s own extensive collection, was named the overall winner at the 2021 Museums and Galleries National Awards (MAGNA) held in Canberra last night.

The City of Newcastle facility initially took out the Temporary or Travelling Exhibition Level 1 (for project budgets under $20,000) before being selected as the most impressive entry overall from 42 finalists shortlisted across the 16 categories. Newcastle Art Gallery’s On Stillness exhibition was also highly commended by judges in the Temporary or Travelling Exhibition Level 1.

The Museum’s award followed an announcement earlier in the day that its Director, Julie Baird, had been selected as the Vice President of the National Council for the Australian Museums and Galleries Association Incorporated (AMaGA).

Newcastle Lord Mayor Nuatali Nelmes said it was a great honour for Newcastle Museum to become the first regional, Local Government-run museum to win the national award in its own right.

“Museum Director Julie Baird and the City of Newcastle staff involved in this exhibition should feel proud of their achievements, which saw them beat renowned institutions including the National Museum of Australia, the Australian Centre for the Moving Image and the Australian National Maritime Museum, whose exhibitions had budgets in excess of half a million dollars each.

“This is one of the most significant cultural awards Newcastle has ever won and is testimony to the skill and creativity of Julie and her City of Newcastle colleagues.

“Julie’s appointment as Vice President of the national council also reflects her expertise, innovative leadership and years of dedication to the Australian galleries, libraries, archives, and museums sector. It acknowledges the importance of Local Government funded museums in the cultural landscape.”

Ms Baird said Newcastle Museum’s exhibition was a massive team effort, conceived and created locally in less than a year amongst the uncertainty of COVID-19. Designed as a travelling exhibition, it is now going on tour, with Randwick City Council’s La Perouse Museum as its first stop in September.

“1X4 is an innovative, collection-rich, social history exhibition and website exploring the multiplicity of narratives each object can tell,” Ms Baird said.

“It has attracted widespread interest, with three museums already adding it to their touring exhibition program and requests for it through until 2023, while major UK institution The Victoria & Albert Museum tweeted about the innovation of the exhibition and local government-funded museums in Canada have been in contact and are interested in creating their own version of the 1X4 concept.

“It was a fantastic effort by all those involved in its creation, and we are so proud and shocked to have been acknowledged with the National MAGNA award.”

Newcastle Museum completed a clean sweep in Canberra last night after the 1X4 website also won the Program Website – Level A award at the Museums Australasia Multimedia and Publication Design Awards 2021, which celebrate excellence and quality in design of publications and multimedia produced for the museum sector.