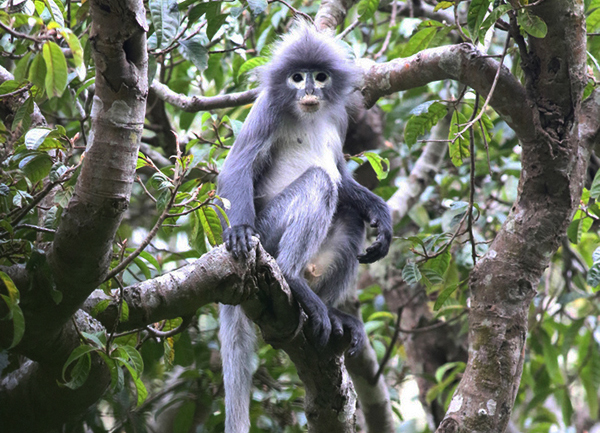 Endangered: A Popa langur, a primate that has been newly identified as a separate species, that lives on Mount Popa in Myanmar. Credit: Australian Museum.

When it was first seen two years ago, there was no doubt the monkey was super cute, its dark grey eyes surrounded by beautiful rings of fluffy fur.

Last weekend, a scientific paper confirmed that the primate was a newly discovered species named Popa langur (Trachypithecus popa) that had been living on earth for more than a million years.

No sooner had researchers “discovered” it, they warned that it was facing extinction. It is likely to be listed this week as critically endangered, and plans are under way to stop logging the forests in the area where it lives in Myanmar.

“We were blind to its existence until now,” the Australian Museum‘s new chief scientist Kristofer Helgen said. He is one of the lead authors of a paper describing the species in Zoological Research.

Professor Helgen said the primate was a “really gorgeous thing” with its “shocking silver hairdo” and its long tail. 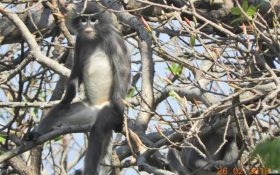 Endangered: The Popa langur is a cute primate that has only just been identified as a separate species. There are only about 200 left. Credit: Australian Museum.

But not everything that is newly discovered is as arresting as the Popa langur, said Professor Helgen, acknowledging that cute animals often get more attention than less attractive ones.

But describing and understanding differences between species was a matter of life, death and pestilence, he said.

“Rat A might be a source of the plague whereas rat B might not be. One bat carries COVID-19, while another bat that looks very similar may not,” he said.

In this case, scientists had initially thought the monkey was the same species as a similar langur. But when collaborators examined its dung, it was different. To confirm it was a newly discovered species, they examined specimens from langurs in museums around the world, including 100-year old skin and skull held in London’s Natural History Museum. 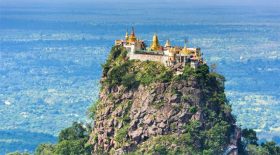 Professor Helgen said this confirmed the Popa langur had a unique evolutionary line dating back a million years.

Finding new species of mammals, particularly larger ones such as the Popa langur, is rare. Primates are human’s closest living relatives, yet there was much we did not know about them, he said.

And each discovery helped scientists work to conserve the biodiversity of the planet and inform conservation decisions to save animals like the Popa langur, he said.

The Popa langur probably survived because it lives on the slopes of an extinct volcano, Mount Popa, for which it has been named. Compared with similar langurs, it has differently shaped teeth and fur colour, and has a longer tail, at 80 centimetres. But it is now in danger of extinction from urbanisation, land clearing, logging, human encroachment, and the illegal pet trade.

Ngwe Lwin, a primatologist in Myanmar, said additional field surveys and protection measures were urgently required “to save the langurs from extinction”.

Christian Roos, lead scientist with the German Primate Centre said: “The DNA analysis of museum specimens collected for the Natural History Museum in London more than 100 years ago has finally led to the description of this new species, confirmed also by samples collected from the field by FFI’s research team.”