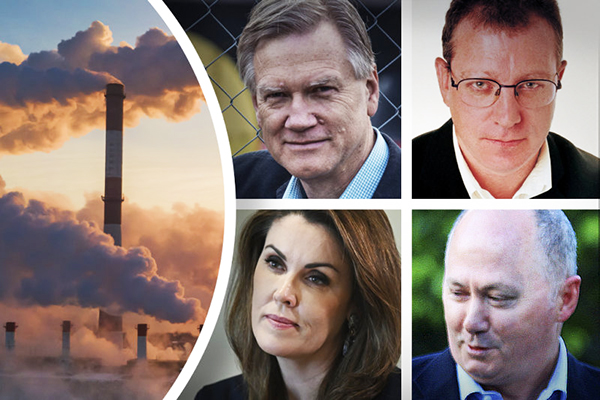 Well before news broke that News Corp tabloids were to start promoting carbon emission reductions, rumours were spreading in the delicate ecosystem of Australian climate scientists, policy wonks and advocates.

Emails bounced around sharing titbits. Some reported fielding questions from unlikely quarters about 2050 net zero targets. Some were delighted, some sceptical, and others downright distrustful.

When The Sydney Morning Herald and The Age reported that News Corp papers were planning a climate push, it made news around the world. 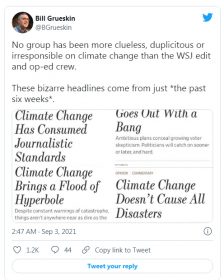 Vanity Fair asked if the apparent shift in the Australian mastheads might be reflected in the Murdoch empire’s US outlets such as Fox News and The Wall Street Journal. The New York Times described to its readers News Corp’s Australian newspapers as places where “solid journalism often sits beside unrelenting ideology in articles that often do not carry an ‘opinion’ label”.

One of the Journal’s own former editors tweeted of the paper’s climate coverage, “No group has been more clueless, duplicitous or irresponsible on climate change than the WSJ edit and op-ed crew.”

He attached a string of climate sceptic headlines from the past six weeks.

It is hard to exaggerate how News Corp’s coverage of climate change – and of climate scientists themselves – have scarred the sector. In his recent book The New Climate Wars, leading climatologist Michael Mann wrote that the company’s amplification of a false conspiracy known as “climategate” helped derail the Copenhagen climate summit in 2009, setting back global efforts to rein in warming by crucial years.

In Australia, critics say the coverage has contributed to decades of policy inertia on the issue.

The headlines in the Murdoch papers were often brutal and sometimes brilliant. In February 2010, then climate change minister Penny Wong said Australia’s beaches could be eroded away over the coming century at a National Climate Change Forum. In response, the front page of The Australian read “Wong wipeout doesn’t wash with locals”. 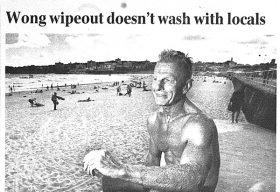 It quoted Bondi local Lee Boman who said he hadn’t noticed any sea-level rise. It also featured Bondi regular Patrick Doab who said no one could predict how sea levels would change because it was “like the stock market”. 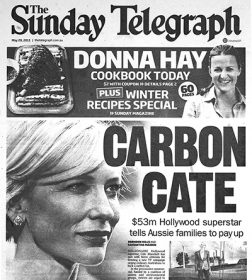 In 2011, Cate Blanchett was dubbed “Carbon Cate” on the front page of The Sunday Telegraph after fronting a TV campaign urging Australians to promote the Gillard government’s carbon tax. It positioned Blanchett as an out-of-touch millionaire and said then opposition leader Tony Abbott would “save” Australia from the tax. The tax was scrapped in July 2014.

In the lead-up to the 2019 federal election The Australian ran the headline “Carbon cut apocalypse: cost of the ALP energy plan”. The story quoted modelling by Brian Fisher that asserted Labor’s 45 per cent emissions reduction target would wipe $472 billion from the economy and drive electricity prices up by 50 per cent. 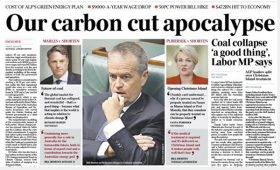 According to the Australia Institute, the modelling was a “complete outlier” compared to analysis of more than 20 other modelling exercises and Treasury models that found the economic impacts of high ambition targets small or negligible.

In December 2020, Wendy Bacon and Arunn Jegan analysed all news, features, opinion pieces, letters and editorials discussing climate change that appeared in The Daily Telegraph, Herald-Sun, Courier Mail and The Australian between April 2019 and March 2020.

They found 45 per cent of all coverage either rejected or cast doubt on consensus scientific findings. Their research asserted that most News Corp reporters do not promote sceptical views, but of 55 per cent of stories that accepted climate science, misunderstandings about that science were almost always promoted rather than explained, and the reporting on the effects of climate change was negligible.

View video: It has been revealed UK Prime Minister Boris Johnson has bowed to pressure from the Morrison Government over climate change targets.

Half of the news and feature stories either had no source or one source.

In a staff email obtained by The Sydney Morning Herald and The Age, News Corp Australia’s executive chairman Michael Miller told local staff that the company’s columnists and commentators would not be “muzzled” as part of their editorial campaign on climate change.

One media adviser at a leading environmental group this week said she believed slanted news coverage in News Corp was more dangerous than the commentary. “At least you know what you are getting in the opinion pages.”

One of the hallmarks of the coverage was that it was as willing to discredit the scientists as it was the science itself.

In one infamous instance the Daily Telegraph, the Herald-Sun and The Australian published stories attacking author and environmentalist Tim Flannery for buying a property near the waterfront north of Sydney.

It did not matter that the house in question sat above the level of predicted sea-level rise, the coverage suggested that it proved climate change was a hoax and Flannery a hypocrite.

After one of the mastheads ran a story showing the home’s location Flannery was forced to take on extra security. He eventually won a retraction, an apology, and legal costs.

It’s worth noting that the News Corp mastheads picked up the story from a segment on Ray Hadley’s show on 2GB, now a stablemate of this masthead.

According to Marian Wilkinson, whose recent book The Carbon Club is a forensic analysis of the interplay between the political, media and industry actors who have stalled action on climate in Australia for decades, News Corp’s coverage influenced other media in the country.

She believes even the ABC “pulled its punches” on climate coverage for fear it would look soft when compared with the Murdoch press’s hardline climate denialism.

Wilkinson is one of many who believe that Australian climate and energy policy has been rudderless for decades, but she does not blame News alone.

Rather she says the Murdoch empire helped derail climate action along with well-connected fossil fuel industry lobbyists and complicit politicians from both parties.

The result is the nation is now slowly engaging in the process of decarbonising its energy system, but years have been lost and billions of dollars of public money wasted, she says.

So far News Corp has not commented on – or denied – the coverage and its silence is being met with speculation. They did not respond to a request for comment about this article.

Wilkinson notes that if News Corp does shift its editorial stance it would be falling in line with the corporate and financial sectors and with major advertisers such as Woolworths and Coles.

Mann is one of many who note that such a move would also help solve a problem for Prime Minister Scott Morrison, who wants to announce a net zero target before or at the COP26 climate talks in Glasgow but faces trenchant opposition from some Nationals MPs.

“This may be more about giving Morrison cover going into an election year, by establishing the pathetically low bar of ‘net zero carbon by 2050’ as somehow constituting meaningful action, particularly given that he is being roundly criticised by the world community for his meager climate commitments going into COP26,” Mann said on Friday.

“‘Inactivists’ – polluters and politicians and media outlets such as News Corp that have enabled them – are moving away from outright denial because it’s no longer tenable.

“This is particularly true in Australia after having lived through the climate change-fuelled devastation of the Black Summer of 2019-20. Instead, as I describe in the book, they’ve turned to other tactics – delay, distraction, deflection, division, etc – in their effort to maintain the fossil fuel status quo.

“Focusing on a target of 2050, three decades away, kicks the can so far down the road that it’s largely meaningless.”

Though he welcomes the apparent shift in editorial direction, Flannery says the impact of its coverage extends beyond the politics of climate change.

He recalls meeting James Murdoch, who recently quit the company in part due to its climate coverage, at an awards dinner a decade or so ago.

“What you’ve done,” he told him, “is destroyed people’s faith in science, and that will play out in many ways and it will take many decades to undo that damage.”