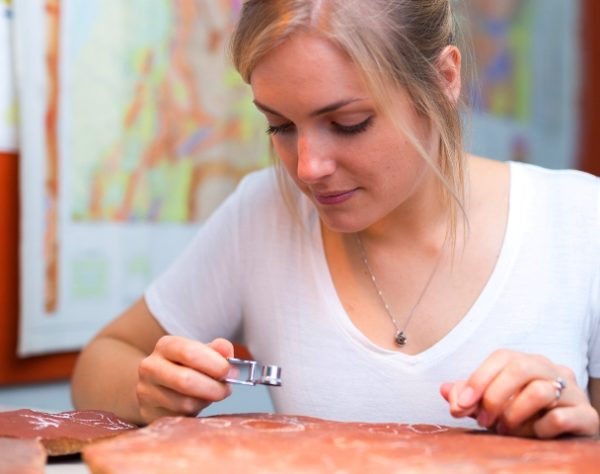 Lily Reid is the future face of fossil science and in South Australia she’s at the centre of the current and controversial debate around the evolution of the first forms of macroscopic life on Earth.

Lily is the first recipient of the South Australian Museum’s new PhD Scholarship Award, generously supported by a private foundation, and will undertake a PhD taking a new look at fossil sites in the Flinders Ranges.

This important new scholarship will provide critical funds to support and encourage the work of early career researchers and will create real opportunities for future leaders in scientific research. The scholarship will allow Lily to undertake her PhD with South Australian Museum Senior Research Scientist palaeontologist Dr Jim Gehling and Dr Diego Garcia Bellido, Australian Research Council Future Fellow at Adelaide University and Honorary Research Fellow at the Museum, under the supervision of new faculty member at the University of South Australia geochemist Dr Justin Payne.

South Australia is home to one of the greatest fossil discoveries of the last century, the Ediacaran fossils in the Flinders Ranges which were marked with a Golden Spike in 2005. A Golden Spike is an internationally recognised marker hammered into the rock denoting the beginning of a geological time period. The Ediacaran Period was the first new rung in the ladder of geological time for 120 years and the first Golden Spike ever established in rocks of the Southern Hemisphere.

“I was pretty fascinated to discover that we’ve got this wealth of amazing fossils in our backyard in the Flinders Ranges,” says Lily. “I feel so fortunate to come to the Museum and work with them every day.”

“People aren’t really aware that South Australia is home to fossils of the earliest form of complex life on Earth and that’s part of what we need to do, to educate people.  They’re a huge part of South Australia’s heritage”

“It’s very important for us to get our own home-grown students who have Australia‘s heritage at heart and can work in a new way across disciplines,” he says.

“And if you want to look at this critical period in life history you better come to South Australia. We’re a big part of the story in the great leap forward in understanding the history of life. There’s a deep interest worldwide in trying to work out where things came from, what the true origins of life on Earth are.”

Lily will take a new approach using geochemistry to analyse the palaeo-environments that sustained Ediacaran fauna fossils. She will also undertake a census of the 50 or more sites across the Flinders Ranges – collating and quantifying the information to see what it can tell us about the different organisms and how they behaved and developed in different environments.

The Museum’s Head of Research and Collections, Dr Mark Hutchinson says Lily’s proposal was a very interesting and sophisticated project which would also advance research links between the Museum and the University of South Australia where she will be enrolled for her PhD.

“Lily has an unbeatable combination of a stellar academic record in her first degree, and a project proposal that focuses on the Museum’s internationally significant Ediacaran fossils,” Dr Hutchinson says.

“The Museum is very pleased to be able to have this new scholarship available to encourage students of Lily’s calibre to choose the Museum as a source of ideas and material for their studies.”

About the South Australian Museum

The Museum’s world class collections have been amassed over more than 150 years with more than 5 million specimens, objects and artefacts and growing – used each day in scientific and cultural research. That ongoing, relevant and internationally respected research makes the South Australian Museum Australia’s most successful museum in terms of both competitive research funding and peer-reviewed publications.

About the PhD Scholarship

New for 2016, this award supports doctoral science research students in the broad fields of Biological Sciences or Earth Sciences to carry out their project at the South Australian Museum while enrolled in a PhD program at an Australian university. The successful candidate will receive the award each year for three years, to match the three-year span of a PhD stipend held by the student from other sources.