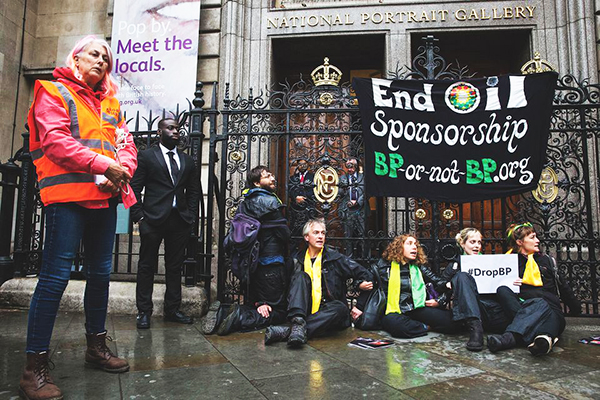 Protesters at the National Portrait Gallery in London failed to persuade the director to end sponsorship by the oil giant BP © Mark Kerrison/Alamy.

National Galleries of Scotland has announced that it will no longer host the BP Portrait Award exhibition, saying that this year’s edition will be “the last time” that it stages the show in its current form. “Today we are announcing that we are ending our arrangement with the BP Portrait Award,” gallery officials posted on Twitter.

In an online statement, gallery officials add: “At the National Galleries of Scotland we recognise that we have a responsibility to do all we can to address the climate emergency. For many people, the association of this competition with BP is seen as being at odds with that aim.”

In June, several artists called on the NPG to drop the oil company’s sponsorship of the prize. In a letter to Nicholas Cullinan, the gallery’s director, artist Gary Hume expressed “discomfort about continuing to have BP as the sponsor of the award”.

In response to the decision taken by National Galleries of Scotland, the National Portrait Gallery, London, said: “We respect the National Galleries of Scotland’s decision and we are grateful for all the support they’ve given to the award over the years. We also very much look forward to continuing to partner with them in the future, and especially over the next three years as we share our Collection widely around the UK during the building works for Inspiring People in a nationwide series of innovative collaborations.

We are currently considering options for our annual competitions when the building in London temporarily closes from 29 June 2020 to spring 2023.”

The statement from the National Galleries of Scotland adds: “We are grateful to the National Portrait Gallery in London and to BP for the opportunity that the competition and exhibition has provided to inspire young talent and to promote portrait artists from around the world.”

Meanwhile, a commentator says on Twitter: “A brave decision and not an easy one to make… maybe the friends and patrons could sponsor?”

UPDATE: This article was updated to include comment from the National Portrait Gallery, London.