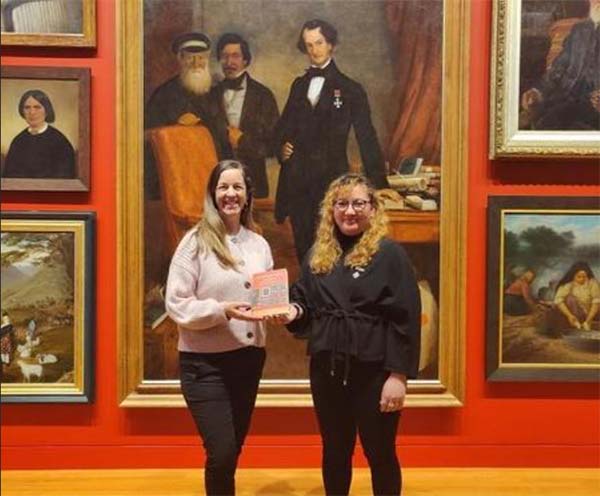 Authors Rebecca Rice (left) and Matariki Williams with their book in front of the Encounters wall at Te Papa.

A selection of 36 historic portraits of Māori and settlers have hung on Te Papa’s distinctive blood-red wall at Toi Art for the last three years, and now the stories behind them are being told in a new book written by the exhibition’s curators.

Matariki Williams and Rebecca Rice have written about the stories behind the portraits in a bilingual book called Ngā Tai Whakarongorua – Encounters.

Pictured are famous individuals, wealthy immigrant families, young girls and boys and a queen – a juxtaposition of subjects. Some are named while others aren’t, and the curators are hoping the exhibition and book might lead to some unnamed subjects being identified. 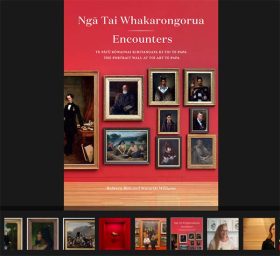 The book discusses the relationship between the artists and their sitters and highlights the risks in taking a portrait at face value.

Who decided what would be worn and the final pose, and did they discuss the portrait’s background?

Rice says we’ll never really know answers to most of those questions, which is the “magical thing” about art.

“It is art. It’s not documentary. So on the one hand, I think what Matariki and I were always really cognisant on with portraiture is often it does embody certain power relationships between the subject and the sitter.

“Sometimes it’s the sitter saying, ‘I want to be painted this way, paint me how I wish to be presented for the future’. And on other occasions, it’s a reverse power dynamic where it’s the artists perhaps presenting, often in the case of our colonial histories, indigenous subjects, as they wish them to be seen for what’s acceptable, what’s expected in terms of our contemporary audience at that time.”

The portraits allow people to question those processes and reflect upon histories embodied in them, Rice says.

Williams says in some cases, Māori subjects were encouraged to wear traditional Māori adornments at a time when European clothing was widespread.

“And so that itself is, is an interesting kind of exchange of power, and the gaze in that perhaps the artists were wanting to capture this idyllic idea of what a pre contact Māori person looked like. At a time when actually, there was tides and tides and tides of change occurring.

“And there’s many instances of that on the wall as well, where we, as curators have added another layer of I guess, interpretation and narrative and conversation, but also invite our visitors as well to add to that as well, because this is an ongoing thing. And in the way we approach histories within the wall is very multi vocal, there is no one no one way of interpreting these taonga, and no one way of us determining what the story behind them is either.”

‘The Emigrants‘ by William Allsworth is one of the paintings featured in the exhibition and depicts the Allsworth family gathered on the shores of their Scottish Highland home ready to depart to New Zealand … or so it seems.

The family arrived in Nelson in 1844 but didn’t come from Scotland. They had in fact been living in London and all the children were born there, Rice says. It was made to look like they had come from Scotland, whereas they hadn’t.

Recently, a descendant of one of the children depicted, who went on to marry a Māori woman, emailed Williams and Rice. He told them that saying the family wasn’t Scottish was akin to saying his daughter, if born in Australia, wasn’t Māori.

“So we’ve reshaped the text both online and in the book to reflect the fact that while there is a degree of myth making perhaps, on the other hand, perhaps it’s a regrounding of identity as this family is taking off for unknown lands on the other side of the planet,” Rice says.

“I mean, they probably want to be thinking about where you came from when you’re about to go on this amazing adventure from which you may never return. So I like that, that just our knowledge keeps changing and shifting, never quite pinned down.”

Rice’s favourite story is about a 1906 portrait of Dr Gray Hassell. When examining the back of the frame the pair noticed part of the canvas wasn’t wrapped around the frame, and when looking closely at the image they noticed a little bit of lace at the bottom right corner.

“And what transpired, which we discuss is that actually, this was once a double portrait of Dr. Hassell and his first wife. But when it was gifted to the museum by the second wife, the first wife was missing, so it seemed to actually literally have been cut out of the portrait.

“So you know, these things you don’t know, unless you start taking off the frame and looking at the back of the painting. And, you know, with all these new technologies, seeing the pencil marks that the artists used to create beautiful detail. It really is a wonderful process to be part of.”

Williams says while the book is bilingual, the translation isn’t always direct, but rather parallel in some cases.