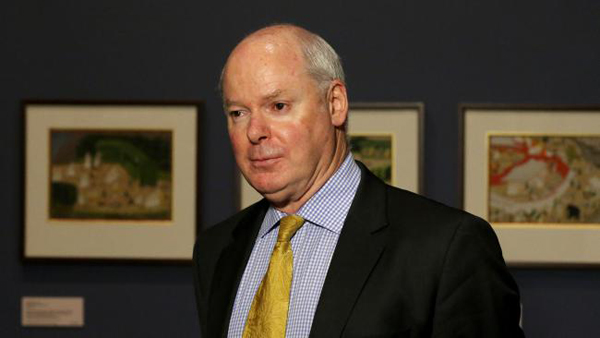 The National Gallery of Australia will launch an international hunt for its next director, one of the nation’s most prestigious arts roles, following the retirement of Gerard Vaughan after four years in the top job.

When Vaughan was appointed NGA director in 2014, he moved quickly to repair the Canberra gallery’s reputation amid disquiet over its handling of stolen Asian antiquities. He launched a review of its Asian art collection and acknowledged that there were works that needed a “renewed level of scrutiny”.

The gallery later released an independent review by former High Court judge Susan Crennan that found the NGA, along with other galleries, had been the “victim of a well-planned fraud”.

A scholarly, measured leader, Vaughan previously had led the National Gallery of Victoria for 13 years. His chairman at both the NGA and the NGV was Melbourne lawyer Allan Myers.

While in Canberra, Vaughan has overseen a rehang of the NGA collection, moving Australian art downstairs while relocating the international collection, including Jackson Pollock’s famous Blue Poles, to the second floor.

He also shifted the emphasis of the display, arranging works thematically rather than chrono­logically, while building greater flexibility into what could be shown at any one time.

Major recent exhibitions have included a Tom Roberts retrospective as well as shows devoted to the likes of Mike Parr and James Turrell. The gallery’s next major exhibition, Hyper Real, opens next month.

Global executive search company Korn Ferry will lead the international recruitment drive to find a new director for the gallery ahead of Vaughan’s retirement in October next year.