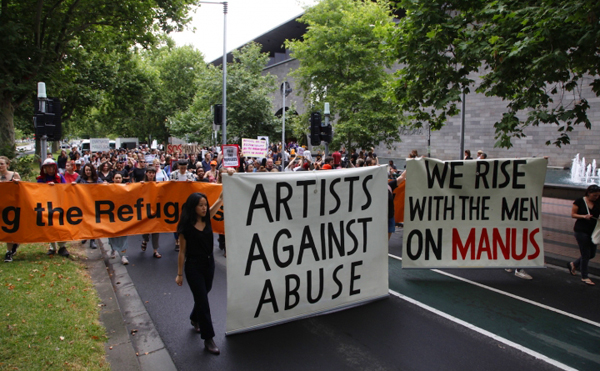 A protest outside the National Gallery of Victoria (photo by Tatjana Plitt, courtesy the Artists’ Committee).

The National Gallery of Victoria will no longer work with Wilson Security, though it claims recent protests and petitions did not drive the decision.

The National Gallery of Victoria (NGV) in Melbourne has dropped Wilson Security, a firm that also provided security services at Australia’s offshore detention centers on Manus Island and Nauru.

The museum’s contract with Wilson Security had spurred performance protests, petitions, campaigns, and demonstrations. Late last year, some of the artists featured in the NGV’s triennial changed their works’ titles and content in protest against the security firm. The museum suggested that its change of security contractor was not informed by the protests, but was simply an administrative matter.

“Wilson Security was the NGV’s interim security service provider while we were in a Victorian government procurement process to secure a long-term security services provider,” said a NGV statement, quoted by the Guardian. “We have commenced the short transition to our new provider.” The museum has not responded to Hyperallergic’s inquiries.

However, members of the Artists’ Committee — one of the groups that organized protests against Wilson Security’s work at the NGV — believe the public outcry and outrage played a factor in the decision.

“The new contract was being awarded by the same panel that appointed Wilson Security in the first place,” Gabrielle de Vietri of the Artists’ Committee told Hyperallergic. “We can’t see any reason why they would have changed provider had it not been for the vocal community opposition, the statements from detainees, the artists who turned down opportunities at the NGV, all the conversations behind closed doors, and of course, the creative interventions that the Artists’ Committee carried out. All of this contributed to the increasing public awareness of the terrible abuse that Wilson Security has committed against children, women, and men on Manus Island and Nauru. The state government couldn’t risk any further damage to the NGV’s reputation and we firmly believe that the Artists’ Committee’s campaign was instrumental in their decision not to reappoint Wilson Security.”

Late last year Wilson Security ceased to operate at Australia’s detention centers after leaked documents and public campaigns revealed the company’s role in downplaying and underreporting violence and human rights abuses at the facilities. Now, the NGV has signed a long-term contract with SecureCorp, a firm that lists unspecified work for government agencies and natural resources industries on its website.

“On the surface, SecureCorp does appear to be a better choice than Wilson Security, however we acknowledge that it can sometimes be difficult to uncover a whole and truthful image about a corporation from their online presence,” de Vietri said. “We would hope that from now on, the NGV will be very mindful about their commercial relationships and look at what kind of public image these relationships project. This includes not only the contracts they have with providers, but also their engagement of sponsors and donors, members of their business council and who is on their boards.”

The Artists’ Committee’s protest performances included a blockade of the NGV’s main entrance at the VIP opening of the triennial, a rally and cello performance outside the museum, and draping a Wilson-branded veil over Pablo Picasso’s painting “Weeping Woman” (1937).

Another Australian security firm with contracts at the nation’s refugee detention centers, Transfield, became the focus of a sustained protest campaign in 2014 for its sponsorship of the Biennale of Sydney. After many artists joined a boycott of the exhibition, the Biennale dropped Transfield as a sponsor and its chairman resigned.

According to Human Rights Watch, there are some 2,000 refugees and asylum-seekers being held in Australian detention centers on Nauru and Manus Island. Nine people have died in the facilities since Australia began its offshore processing regime in 2013.