You are here: Home » Articles filed under: 'News' » Article: 'NGV workout an exercise in admiring art and'

NGV workout an exercise in admiring art and 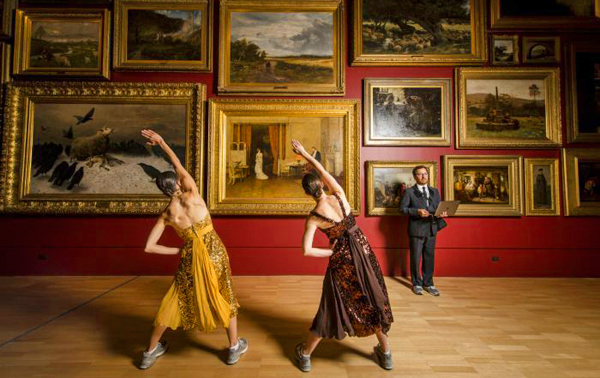 Keep quiet. Don’t run. See as many exhibits as you can — art galleries and museums have always had strict sets of rules and expectations.

But two of Melbourne’s premier exhibition spaces are smashing those rigid requirements, encouraging visitors to run, dance and fist pump their way through the corridors and galleries.

The Gallery Workout is a 50-minute exercise tour through Arts Centre Melbourne and the National Gallery of Victoria.

It’s exercise but not as you know it. As part of MEL&NYC, join Monica Bill Barnes and Company's The Gallery Workout for a 50-minute exercise tour through Arts Centre Melbourne and the NGV, elevating your heart rate outside opening hours. Book now: http://bit.ly/2KEqNlAThis is a MEL&NYC event, supported by the Victorian Government. Supported by VicHealth.

Posted by National Gallery of Victoria on Thursday, 12 July 2018

“When most of us go to museums we’re trying to see everything or make sure we see the most important pieces of art, and in this experience we’re really asking the audience to spend more time in front of fewer works,” she said.

The workout has been held at The Met for more than a year and has also had short stints at two other American museums.

It has travelled to Melbourne as part of the winter festival MEL&NYC.

Ms Barnes said people were often nervous in the beginning but soon relaxed into the unusual circumstances.

“It’s such a strange thing to show up early in the morning at a museum in your gym clothes,” she said.

“The thing that people most often say is they were surprised by how emotional it feels to look at art while trying to balance on one foot and listen to Myra tell a story.

“She’s telling this story about what is art … and it really added up to something that had emotional weight.”

Creative producing director and performer Robert Saenz de Viteri has spent a lot of time in theatres, galleries and museums, but admits he often feels overwhelmed by expectations.

“You feel like you have to feel these kinds of things and you have to check all these things off, and at the same time your back starts to hurt and the floor’s really hard and you start shuffling along,” he said.

“You’re there for an intellectual experience but it never gets emotional.

“I think as a dance company, one of the things we’re always doing is making emotional connections through movement and music and so much of this piece was trying to understand how we could do that for people in museums who aren’t dancers.”