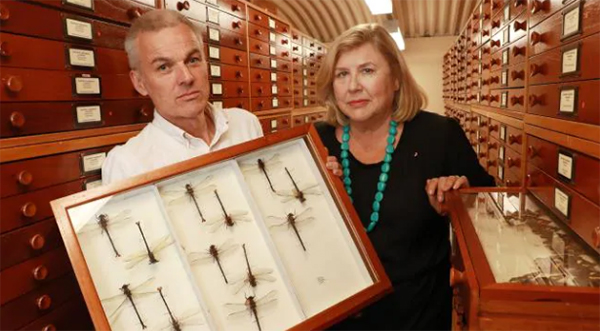 The nation’s most prestigious natural history museums are calling for more national action to combat climate change as they prepare to use their world-leading research to help in restoration ­efforts for native plants and animals devastated by bushfires.

“We now recognise human-­induced climate change, alongside land-clearing and habitat use, as the overarching issue affecting Australia’s unique wildlife as evidenced by more intense bushfires, drought, floods and the impact of warming oceans on the Great Barrier Reef and other marine environments,” the museum directors and chief executive officers said in the statement.

The statement said the impact of the recent fires on Australia’s biodiversity was on a “scale not previously seen since record-keeping began in the mid-1800s’’.

“The estimate of the destruction to our biodiversity from the fires is in the ‘trillions’ of animals, when considering the total of insects, spiders, birds, mammals, reptiles, invertebrates and even sea life impacted over such a vast area,’’ the museums said.

They were committed to working to find out how species had been affected, to implementing and supporting programs to restore those species that could be saved, and to engaging the public in mitigation strategies.

Over the next few months, each museum plans to send researchers into the field to work with other agencies to find ways to restore endangered plants and animals.

Australian Museum director and chief executive Kim McKay said governments should give some of the $2bn in bushfire ­recovery funds to museums ­“because we’ve got something amazing to contribute”.

She said a good example for where funds could be spent was on Kangaroo Island, where much of the island’s koala habitat has been wiped out. Museums Victoria director and CEO Lynley Crosswell echoed Ms McKay’s sentiments, when she said “our actions now will be critical to saving thousands of species and ecosystems under threat”.

“It is not an overstatement to say that we face an environmental crisis,” she said. “Australia’s natural history museums will play a vital role in sharing the wealth of scientific insight and knowledge contained within their collections.”

Museums Victoria has detailed datasets that cover many of the major groups of living creatures across the bushfire-ravaged areas of the state. In response to the fires they have started working with various agencies of the Victorian government on “how best we might bring our expertise and knowledge to the recovery phase”.

Western Australian Museums CEO and director Alec Coles said the relationship between climate change and bushfires was “surely now established” and that work must be done now to stop further loss of biodiversity.

“We are horrified at the human impact of bushfires across Australia. Our thoughts are with all those who have been affected,” he said.

More than 10 million hectares have been burned in recent fires.