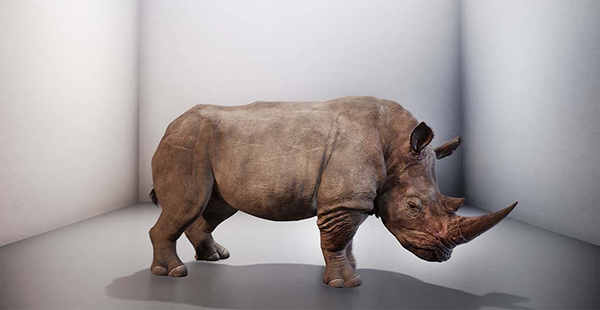 Visitors to the Natural History Museum will soon be able to engage with an emotive, life-like digital recreation of a northern white rhinoceros. This critically endangered species has only two remaining females; the last male, Sudan, died in 2018. Drawing on AI technology and rare research footage of the last northern white rhinos, this virtual rhino will be roaming in a digital world within the Museum’s Jerwood Gallery as part of a new art exhibition from acclaimed artist Alexandra Daisy Ginsberg.

Opening on 16 December 2022 until March 2023, The Lost Rhino is a free exhibition curated by Alexandra Daisy Ginsberg which explores how an idea of an animal can be more powerful than the animal itself. Through four different depictions of the rhinoceros, each only a partial representation of this endangered species, Ginsberg explores themes of extinction, technology, and the importance of conservation.

At the centre of The Lost Rhino is Ginsberg’s ‘The Substitute’, a captivating life-size projection of a northern white rhinoceros that slowly comes to life, transforming from pixels into a high resolution facsimile, before disappearing. The artwork questions our preoccupation with creating new life forms rather than conserving existing ones and is accompanied by three other imperfect representations of the rhinoceros selected by Ginsberg that explore different ways the endangered animal lives in our imaginations:

Artist and exhibition curator Alexandra Daisy Ginsberg comments: “The Lost Rhino brings my work together with artefacts from the Museum collections and beyond in a contemporary cabinet of curiosities. Footage of beating heart cells grown from cells of a dead rhino, the legacy of the most copied image of the rhinoceros, and a taxidermied rhino offer different representations of a rhino.

But these are all ultimately substitutes for the real thing. Each copy is imperfect and created by humans, for humans. They all live on in our imagination, perhaps more powerfully than the living, breathing animal itself. What is a rhino? Even if we can create a complete rhino, is it ‘real’ if it is divorced from its natural context? The exhibition asks if we value the idea of the rhino more than the animal itself and is an urgent call to preserve the incredible diversity of life on our planet before it is lost.”

The death of Sudan, the last male northern white rhino, in 2018 left behind just two females and condemned this subspecies to extinction. Scientists have preserved the cells of northern white rhinos, hoping that future technologies could allow humans to bring the subspecies back. Through the objects in this exhibition, Ginsberg interrogates the ethical and philosophical questions around this, highlights the importance of caring for the natural world, and explores what it means for an animal to exist when it is on the verge of extinction and begins to live only in our imagination.

Natural History Museum Director of Public Programmes Alex Burch says: “This compelling new installation from Alexandra Daisy Ginsberg couldn’t be more timely – research conducted by our own scientists at the Museum has estimated there are one million species of animals and plants at risk of extinction. The Lost Rhino brings together her powerful digital recreation with historic Museum exhibits, art and science, to engage visitors with the reality of species loss and humanity’s impact on our planet.”

Dr Natalie Cooper, Senior Researcher at the Natural History Museum comments: “I met Sudan on a field trip to Kenya a few years before his death. Seeing Ginsberg’s digital recreation of a northern white rhino in this exhibition is very emotional, particularly as we know that the extinction of the northern white rhino is a direct result of human activities. This exhibition raises a lot of questions, most pressing for me is the importance of protecting species that still exist rather than trying to resurrect something that’s gone.”

The Lost Rhino: an art installation by Alexandra Daisy Ginsberg
16 December 2022 to March 2023