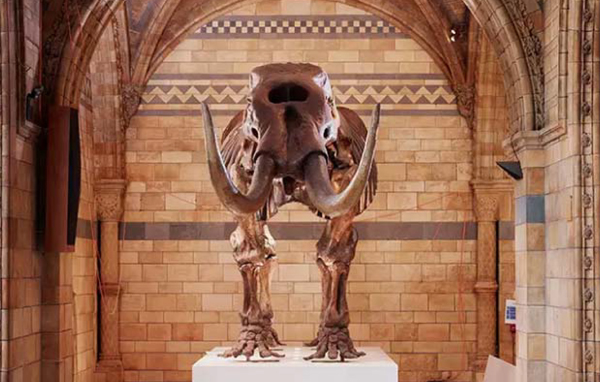 An American mastodon; the species became extinct about 13,000 years ago © Kate Peters.

On March 25 1891, a young blue whale, injured by a whaling ship’s harpoon, beached herself and died on a sandbank at the mouth of Wexford Harbour in south-east Ireland. After the carcass had been stripped of meat and 630 gallons of whale oil, a local merchant sold the skeleton for £250 to the Natural History Museum, which had opened in London a decade earlier.

This summer, the unfortunate whale — let’s call her Blue — will have a glorious renaissance as the centrepiece of the museum’s great entrance hall following a £12m redevelopment. She takes the place of Dippy the dinosaur, who has been banished on a tour of Britain. Instead of a replica diplodocus skeleton plodding across the floor, visitors will see a real 25.2-metre whale swooping gracefully from the ceiling when Hintze Hall reopens to the public after a six-month closure.

“We have arranged the skeleton in an S-shaped lunge-feeding pose,” says Richard Sabin, the museum’s marine mammals curator. “The whale is diving acrobatically towards a patch of krill [small crustaceans] with her jaws open, to take a huge gulp of water from which she will filter out her meal. This is the single largest feeding event of any animal in the history of our planet.”

Although gigantism on land reached a peak with dinosaurs, today’s blue whales are the biggest animals that have ever lived on land or sea. Evolutionary studies suggest that baleen whales, and the blue whale in particular, have grown to this scale within the past three million years in response to the availability of huge concentrations of krill, which they can catch and eat through their specialised filter-feeding mechanism.

The choice of Blue (whose official name has not yet been revealed) to welcome visitors to the remodelled hall is partly aesthetic. Her skeleton fits superbly into Alfred Waterhouse’s 1881 neo-Romanesque structure, an architectural glory of Victorian London, and the colour and texture of her bones match the terracotta walls.