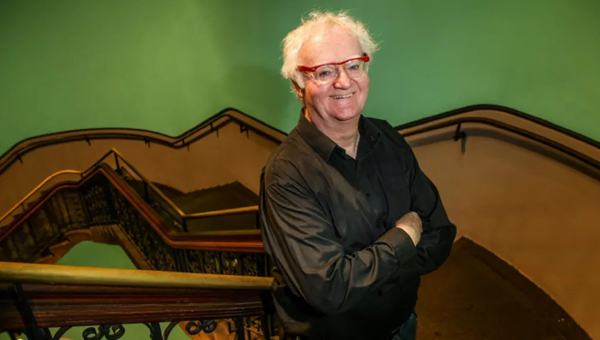 There was even a rumour at the Conservatorium that he had played in a rock ‘n’ roll band. Photo: Dallas Kilponen.

“Mozart and Haydn never sat around waiting for inspiration, they worked their f—ing arses off! You have to be passionate and committed… you have to be hungry for it. If you’re not totally dedicated to music, then find something else to do with your life.”

In a concrete bunker in the bowels of the old NSW Conservatorium of Music, Richard Gill had just read me the riot act.

My harmony homework was crap and Richard was pissed off, his face glowing red with indignation. He really cared about this stuff and by now he had my full attention.

It scared the hell out of me and was the catalyst to reset my priorities and get down to work to see if I could realise my dream of becoming a full time professional muso.

I had spent the last few years under his spell where he conducted the Conservatorium High School kids for choir and orchestra.

Like generations before me and after me, he had the entire school in awe of his musical insights, enchanted by his love of the art form, and bedazzled by his seemingly bottomless boot-load of musical trivia, both profound and absurd.

There was even a rumour going around that he had played keyboard in a rock ‘n’ roll band. Here was a music teacher with real street cred.

If you were having difficulty connecting with your raison d’être, if you’d lost your musical mojo and couldn’t remember what had possessed you to join that hothouse of eccentric music crazies at the Con, the mere presence of Richard in the room would be the perfect antidote for fanning the passion and getting you back on track.

With every gesture and every word, at every minute of the night and day Richard’s message to the world was crystal clear … music was the pinnacle of mankind’s greatest achievements and would ultimately be the salvation of humanity! We were the disciples and Richard was part of the glue that brought all the pieces together and made it work.

One Saturday night a few of the high school kids secretly conspired with his wife Maureen to kidnap Richard and whisk him away to one of our class parties.

A carload of us rocked up to his Stanmore house, threw a large sack over his head, bound his hands and feet and unceremoniously heaved him into the back of my old station wagon.

It was a long trip from Stanmore to my folks’ house on the north side, but Richard entered into the spirit of the occasion like some gawky overgrown kid. Maureen dropped over later to take him home for dinner and we spent the rest of the night congratulating each other on the audacity and success of the operation.

After I left school at the end of year 10 to learn the clarinet from my dad, Richard agreed to teach me harmony.

Like a caring father he would set me harmony exercises, help me to unpack Bach inventions, and reveal the genius of Stravinsky. With interminable patience he would steer my clumsy attempts to write short exercises emulating the style of particular composers and try his best to teach me “how notes work”. I always left the room feeling desperately unworthy, yet never anything less than blessed that I had him to myself for a full 30 minutes each week.

He never accepted payment, so each lesson I would bake him a loaf of bread, a gesture he would fondly recall decades later.

On the way home I frequently snuck into the back of his Dip. Ed. solfège class, where he would never disappoint by peppering the group vocal exercises with cruel jibes at our lack of singing prowess, hilarious anecdotes about famous composers and suggesting that perhaps, due to our ineptitude of the task at hand, we should all consider training for a career in anything other than music

Delivered in the style of a condescending, slightly aberrant pre-school teacher, it was pure entertainment. Carl Orff meets Seinfeld on steroids. This was the genius of his teaching method in full flight, a heady performance of profound insights, rigorous discipline, outrageous hilarity and a juggernaut of indefatigable energy. He should have had his own TV show. Yet for all his berating of our inadequacies, everyone in the room was made to feel special in some way, like the prize of a fulfilling life in music was just within our grasp, if only we had the tenacity and drive to want it badly enough.

His philosophy was that music is at the top of the artistic food chain – “because sound is the first sensation we experience as a baby in the womb” (apparently he had this on good authority….his own!).

It was a compelling argument, and we were all on board to share that yarn with the rest of the world.

In 2005 he invited me to compose a percussion concerto for the concert series Meet the Music. By this stage Richard was hitting his stride as a conductor and forging his reputation as a champion of contemporary music, commissioning and conducting dozens of new concert works by many of Australia’s leading composers.

By investing his faith in local artists, he was joining the dots between the composer/performer relationship and the machinations of introducing new work to an unsuspecting (and frequently apprehensive) audience.

Meet the Music was the centrepiece of the Sydney Symphony Orchestra’s education program and careful steps were taken to pre-empt these concert events with informative study guides, composer lectures, interviews and so forth.

It was especially thrilling to be sitting in the audience amongst the thousands of kids who, having already studied these works at school, greeted the performances with the enthusiasm and hysteria of a rock concert.

We had left the confines of the Con and were now out in the real world living the dream, Richard once again plotting a steady course from the wheelhouse, paving the way for local culture and offering us hope for a rich and promising future for music in Australia.

After the death of my son Eli in 2008, Richard and Maureen invited my wife Janice and I to lunch.

Still very much in the throes of grief, social interaction was a huge challenge for us and something to avoid, yet we were both touched by the invitation and curious to see how we would handle a Sunday afternoon at the Gills’. With the empathy and special understanding of a favoured grandparent, they took us into their home and surrounded us with their love and care. It was heart warming and healing to be with them.

Over the course of the lunch Richard told me that I must write a requiem for Eli.

This was a task I had already begun and I was able to share the score with him some months later upon its completion. In his usual no-nonsense, declamatory fashion, he announced that “the Sydney Symphony will perform this, and you shall conduct the orchestra!”

The idea of standing in front of the SSO to conduct a requiem for my son seemed a terrifying and confronting prospect, yet Richard was adamant that I share the podium with him, myself conducting the first half of the concert, and he taking the baton for the rest of the program after interval.

Here was a side to Richard that had previously eluded me – a man of immense empathy, love and understanding. His counsel and encouragement were crucial to the process of preparing myself for the performance on a physical and emotional level and I had an obligation to my old teacher and mentor to give it my best shot.

This chapter brought us closer together than ever before, and over the coming years there were to be a number of challenging occasions where I would remain in his debt as he so generously shared his wisdom, friendship, strength and insights of the human condition with me.

Early in July 2018 Richard rang to tell me his cancer had returned and the doctors were out of options.

“I’ve had a great life…done a bit of stuff…conducted a few concerts…helped a couple of people. Hell…life sucks and then you die,” he said, accompanied by uproarious laughter. Instinctively I tried to join in, but it didn’t feel right.

I was humbled by his frankness and in awe of his courage.

My head flooded with a million questions, yet I was powerless to utter a single word.

“How will the world keep turning? How can we live without you? What about Maureen? And who the hell is going to advocate for music education?”

He finished by saying he was checking into hospital for pain management.

A week later he was given permission to leave the ward for a couple of hours to conduct a flash mob choir event at Sydney’s Angel Place Recital Centre.

Anyone who knew him would have been able to tell that things were not quite right. His suit had become too big for his diminishing frame and his voice sounded strained, yet nothing was going to get in the way of him delivering the goods. He was in fine form, cracking jokes and berating us all for singing off key and with poor phrasing. The audience was totally enchanted and laughing hysterically, just as we had in solfège class all those years ago.

Those of us in the room carrying the terrible secret were overwhelmed by devastating sadness. We knew it would probably be his last gig.

Richard Gill AO – the pragmatist, the polymath, the juggernaut, the educator, the conductor, the wise sage, much loved leader, mentor and advocate for all good things…what happens now?

It’s up to the many thousands of people whose lives have been touched by the great man to take the mantle and spread the yarn in honour of one who believed in the power of music to heal, to educate, to civilise, to beguile and entertain.

May his memory and passion for art continue to live on in us all, and may we remember him through our love of music; striving for artistic enlightenment as we reflect on the beauty, passion and mirth he so generously shared with the world.

Nigel Westlake is an Australian composer and conductor.