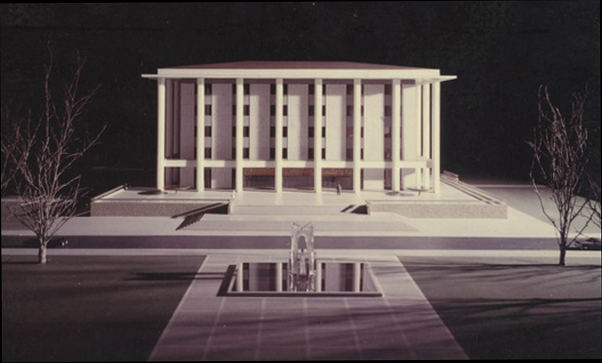 Model of the National Library of Australia. Image: Max Dupain.

The National Library of Australia is holding an exhibition looking at all things 1968 to celebrate fifty years since it moved into its lakeside home in Canberra.

Designed by Brisbane-born architect Walter Bunning of Bunning and Madden, the classical-meets-modernist library was, when completed, the only building to grace the shores of Lake Burley Griffin.

It was also the first major project completed in the Parliamentary Triangle since the opening of the Provisional Parliament House in 1927.

The exhibition, titled 1968: Changing Times, will offer a chance for visitors to reflect on the significance of the library and the architecture of the building.

The library was established in 1901 as the Commonwealth Parliamentary Library but quickly began to acquire collections outside of the parliamentary sphere. It wasn’t until 1960 that The National Library Bill was passed, formalizing its role as the official national library.

A design competition for a new library building was held in 1961, which was won by Bunning and Madden.

Influenced by European and American modernist architecture, as well as the Parthenon in Greece, Walter Bunning designed a library that straddled contemporary and classical design. The monumental library sits on a large podium and features a façade distinctive for its classical marble columns and interiors characterized by clean lines and bespoke furniture.

The Australian Institute of Architects has described the building as “a temple of erudition aloof in its classical detachment.”

Before it moved to the Walter Bunning-designed building, the National Library of Australia resided in a stripped classical building on Kings Avenue.

Designed by Edward Henderson, the earlier library was built from 1934 and demolished in 1968. In its place now stands the Edmund Barton Building, named for Australia’s first prime minister and designed by Harry Seidler.

As the library’s magazine Unbound notes, 1968 was a tumultuous time for Australia and the world at large and the opening of the new library represented “a moment of optimism and confidence in Australian society.”