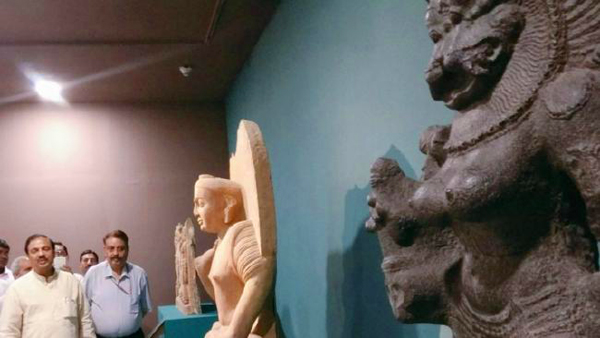 Michaela Boland, Stolen art retakes its place on centre stage in India museum, The Australian, 26 May 2017

The Indian government has made a virtue of the National Gallery of Australia returning three stolen Indian antiquities discovered in its collection by putting them on display in the National Museum of India under the title Return of the Three Stone Sculptures from ­Australia to India.

Dr Sharma was presented with two of the carvings by Arts Minister Mitch Fifield at a handover ceremony in Canberra in September after researchers at the NGA came across photographs that established both statues were in India until recent decades and the Canberra gallery did not have proper title to them.

“The Australian government has been extremely nice to return these artefacts to us without taking even a single rupee from us,” Dr Sharma said.

One relief has been described as a scene from the life of Buddha dated to the first century, the other is a 900-year-old Hindu goddess Pratyangira from the Chola era. Both were bought with public funds in 2005 for $800,000 and $340,000 respectively.

The antiquities were bought from the disgraced New York dealer Subhash Kapoor, who has been held since 2012 on remand in India. American investigators allege Kapoor’s enterprise spanned four decades and four continents and they seized 2600 items from properties associated to him.

Indian police believe these two statues were supplied to Kapoor by trader Deena Dayalan, who has also been arrested.

Their theft was established within a vast due-diligence project undertaken by the NGA after the gallery was revealed to have been one of Kapoor’s biggest clients.

They are the first returns since Tony Abbott in 2014 took to India a Dancing Shiva, which had been bought by the NGA in 2007 for $5.6 million.

The third carving put on display in Delhi is a second-century stone Buddha that was not part of the official handover in September because it had been bought from a different New York dealer, Nancy Wiener, who refunded the $1m purchase price to the NGA in 2014 after The Australian revealed the Buddha purchase had been furnished with bogus papers.