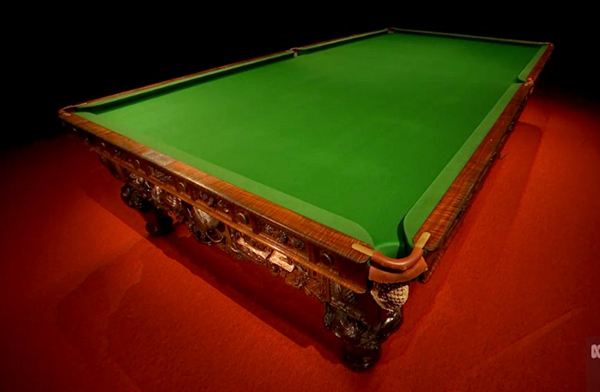 The table substantially adds to the Museum’s National Historical Collection and supports its mission to tell remarkable stories from Australian history.

It was acquired by the National Museum for $1.1 million, with the support of the Australian Government through the National Cultural Heritage Account, which contributed $550,000.

The acquisition was also supported by the Pratt Foundation and donors to the National Museum’s 2022 Annual Appeal.

The ‘Australian Colonial Billiard Table’ and matching scoreboard is an unrivalled piece of craftsmanship that through the depictions of colonial life and native flora and fauna contributes to an understanding of our national identity and design history.

It was also reportedly displayed at Buckingham Palace, where it is suggested that it was admired by Queen Victoria and played upon by billiards enthusiast Prince Albert, the Prince of Wales, who was later crowned King Edward VII.

National Museum director Dr Mathew Trinca thanked the Australian Government for its financial assistance with the purchase of the billiard table, which he said is a one-of-a-kind example of Australian colonial furniture making.

‘The craftmanship and design of this piece is extraordinary. This truly unique acquisition, carefully carved from Tasmanian blackwood, perfectly showcases our colonial history, and we are delighted to be able to share it with the nation,’ said Dr Trinca.

Museum Curator Dr Ian Coates, who coordinated the acquisition, said the decorative panels show how European settlers understood their world, and the vision of Australia they wanted to promote internationally.

‘Perhaps most significant are the scenes of conflict between First Nations peoples and colonists included as part of life on the frontier. Such representations of conflict are rare. They are an important part of our national history – subject matter that was ignored for much of the twentieth century, and which now forms part of the truth-telling about what happened in the history of our nation.’

‘The table and scoreboard are magnificent examples of nineteenth-century decorative arts. They are also highly significant for the prominent role they played in the global dissemination of Australian iconography and themes during the late-nineteenth century,’ said Dr Coates.