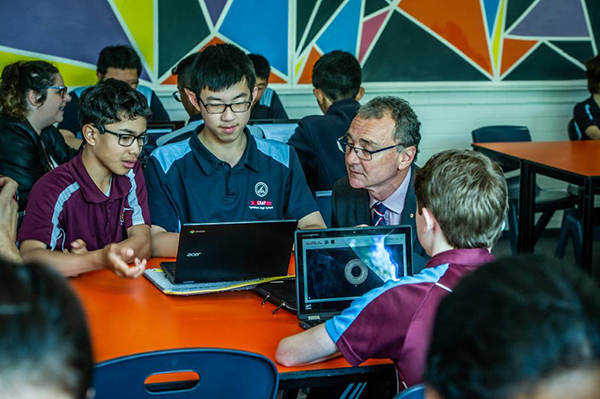 When year 8 student Arjunen Suren sat down in class last week, he did so to learn about Gough Whitlam’s dismissal and the Racial Discrimination Act.

At the same time, his classmates chose to explore topics such as the White Australian Policy, Ned Kelly’s last stand, and the arrival of the first fleet.

The Lyneham High School year 8 class was among the first to try the National Museum of Australia and Gandel Philanthropy’s digital classroom.

Australia’s Defining Moments Digital Classroom is an innovative website that offers resources for teachers and students for Australian history, geography, and civics, and citizenship.

The digital classroom gives students a chance to explore Australia’s history – either at the direction of their teachers or at their own pace – via interactive online games and quizzes, animations, videos, and virtual tours, plus teaching and learning activities.

“It’s good because it’s a way for us to get to know the information in an easy form,” Arjunen said.

“Usually when we have to go look up stuff it’s just big blocks of information. This is like a really easy way of getting select information that we need. It’s been put into filters for us.

“They’re really interactive and it’s good because we’re learning at the same time [while] also enjoying ourselves. A lot of kids don’t like to learn generally, they just want to do what they want. By playing these games, it is us doing what we want at the same time taking in knowledge.”

The free digital classroom draws on the National Museum’s Defining Moments in Australian History project and was made possible by the $1.5 million donation by John and Pauline Gandel in 2018 to support the unprecedented education initiative. 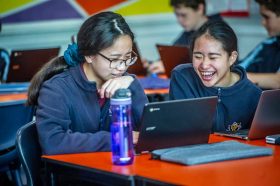 “Our history is something that is as evolved, fascinating and surprising as the history of any nation,” National Museum of Australia director Mathew Trinca said.

“What is great about this site is that through looking at key moments in our history, we can involve students, not just in learning about things but getting active with history and thinking about how they can write history as well.”

Some of the key topics include the evidence of the first people in Australia more than 65,000 years ago when women were granted to vote in federal election in 1902 and the Indigenous referendum in 1967.

“These guys get some complete freedom to go around and explore whatever they want to discover, as well as for us to direct what they want we want them to learn,” Lyneham High School teacher Ryan Nakkan said.

“Part of learning about the past and the future is discovering it for yourself.

“You can hear the information from some person and be like, ‘OK, that makes sense’ but then getting that aha moment when you discover it for yourself is something completely different.

“You can’t fabricate it, they have to do it themselves.”