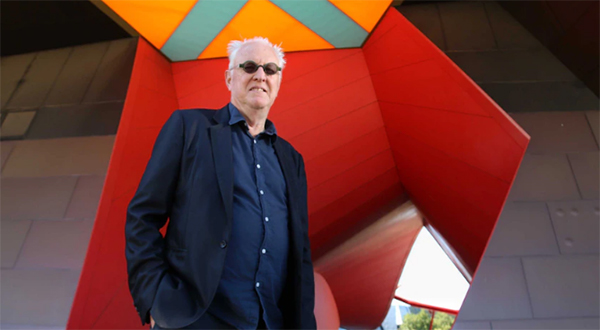 Howard Raggatt designed the National Museum of Australia, which will celebrate its 20th birthday on Thursday. ABC News: Ian Cutmore.

Craig Allen, The National Museum of Australia’s origins are mired in controversy, but its current director says that’s all in the past, ABC News, 7 March 2021

Ahead of the National Museum of Australia‘s 20th birthday this week, the building’s architect has only now revealed the level of government anger that was ignited over a secret political message emblazoned onto its walls.

Howard Raggatt has admitted it was a “cheeky streak” that inspired him to emboss the walls of the monumental building in Canberra with braille messages he knew few could understand.

Most were innocuous, but one, in particular, made the government of the time, led by John Howard, livid.

“Maybe the secret one was, we had quite a lot of ‘sorry’ on the building … which did become a bit of an issue at the time.”

Raggatt said he chose the politically provocative word as a personal protest against the Howard government’s unwillingness to apologise to the Stolen Generations.

Not even the museum director knew what the braille characters were.

And Raggatt nearly got away with it, until an eagle-eyed engineer decoded the writing on the wall just before the building was due to open in March 2001.

The reaction was explosive, he said.

“Ballistic is an understatement — they were just beside themselves with anger,” he said.

The single word that sparked a furious response 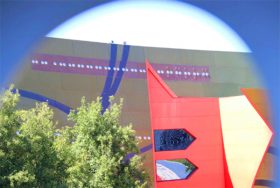 Silver discs were placed over the word ‘sorry’ on the side of the National Museum of Australia.(ABC News: Ian Cutmore).

In the days before the museum opened to the public, the government ordered Raggatt’s firm of architects to remove the words.

But he refused, instead offering up a compromise of sorts.

He suggested installing metal discs across the panels — he had to endure such a compromise, he thought, it may as well be artistic.

Today, it appears the architect got the last laugh.

He has revealed that some of the ‘sorry’ panels survived the purge, and have been there all along, for 20 years.

“We censored enough for people to be happy with it,” he said.

“I don’t know that anyone checked up on us, and we may not have been as thorough as we should’ve been.”

A lot has changed in the last two decades, and for Dawn Casey, who was the museum’s director when it opened, it is time for the government’s changes to be scrubbed from the walls once and for all.

“It now needs to be uncovered,” Dr. Casey said.

“Sorry is not an issue — the government’s apologised.” 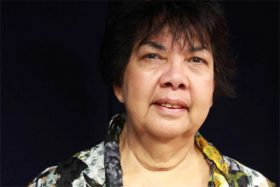 Dr Casey’s tenure as director was dogged by controversy, and she was hounded out of her position by conservative critics in parliament and the media.

Some labelled her as pushing an agenda at the museum that was overly sympathetic towards the experiences of Indigenous Australians — one that was dubbed a “black armband” view.

“There was all this discussion about the history wars, the culture wars,” Dr Casey said.

“That there was a black armband view of history was found not to be the case by independent reviewers.”

Dr Casey now claims that members of her own board were leaking information to the conservative media commentators who were against her, undermining her efforts as an Indigenous woman to cement the NMA’s place in the cultural landscape.

Inevitably, she was terminated from her position just two years after the museum opened.

“I was told by the minister that my contract would only be renewed for a year, that I did a fabulous job ensuring that the museum was built on time and on budget … but they really needed someone with a PhD to carry it forward in years to come,” she said.

“Here I was being told that I didn’t have a PhD … yet it was the government’s policies and systems that had prevented me from obtaining that higher education.

“I was devastated that here we were in the 21st century and we hadn’t come that far really. I was never angry about it, I was just more hurt about it.”

Dr Casey was later awarded an honorary doctorate of arts. 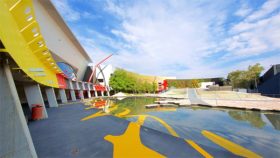 “I think it was an important part of the museum opening its doors, to embrace the discussion that emerged at that time — and [Dr Casey] did that,” Dr Trinca said.

“What it did right from the instant, was to stimulate discussion about what it means to live in this country — and we’ve been doing that ever since.

He said the past was “challenging and confronting”.

“We’re never going to agree on everything about our past,” he said.

“[Today] we speak about the violence on the frontier, and the devastation wrought on the first peoples of this land inevitably by colonial settlement.”

“We speak about those things with a kind of wider view, a greater sense of embrace.” 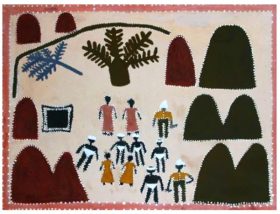 Last year the museum opened the Talking Blak to History exhibition, which deals with the struggles of Aboriginal and Torres Strait Islander people.

Among the works was a painting that had never been shown since it was purchased by the museum more than 15 years ago, by the late Queenie McKenzie.

It depicts McKenzie’s rendition of the Mistake Creek Massacre of 1915. 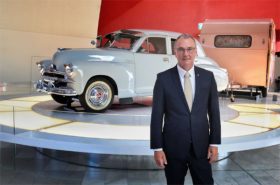 It was not just the content of the museum sparking controversy in the beginning.

For two decades, visitors have complained about the NMA’s layout, which has been described as confusing, disorientating and hard to navigate.

Raggatt said it was a New York-based company that designed the museum’s galleries without ever having visited the building.

As a result, his original design was somewhat obscured.

“We’d found the circulation that we’d envisaged was not necessarily carried through at all,” he said.

“So you ended up in dead ends and turn-backs which we hadn’t expected.” 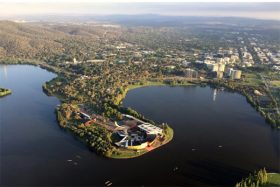 The museum is a striking building that rests on the edge of Lake Burley Griffin. (ABC Canberra: Hannah Walmsley).

“Later this year, I’m proud to say, that we’ll be opening a new gallery of environmental history called Great Southern Land that will also allow us to address some of the issues around circulation that the entry to the galleries posed visitors,” Dr Trinca said.

“It’ll be really clear now when you come into the permanent galleries, where you’re headed, and what the space contains.

“And that’s a great improvement — it was a little bit tight in the old gallery that we had here previously.”

The renovation process has also brought to light some original parts of Raggatt’s design that had been concealed due to the “awkward” fit-out of the galleries.

They include arrow-shaped windows meant to guide visitors on their path through the rooms.

And massive glass windows, showcasing the museum’s lake vistas, have now been cleared — allowing for more light and for visitors to better get their bearings.

Plan to bring out exhibits still hidden from view 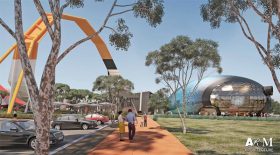 A futuristic building represents the plan for an extension to the National Museum of Australia. (Supplied).

Dr Trinca said the more recent challenge for the museum had become enlarging the building to better display its massive collection of historically significant items, like the recently acquired $8 million Kennedy Collection.

“We only display three or four percent of the collection at any given time, and I want to be able to double that,” he said.

“I think we should be able to see more of these things when we come to the nation’s museum.” 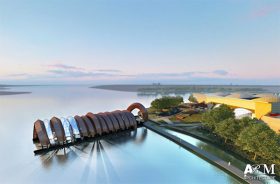 There are plans to extend the museum over Lake Burley Griffin. (Supplied).

A recently released masterplan includes ambitious ideas, including enlarging the NMA and take further advantage of its plum real estate.

Part of that vision is for futuristic new buildings that will extend over the lake itself.

“I think inevitably it will double in size because that would be sensible and realistic when we consider the great breadth of the collection that we can’t show on this site — we simply don’t have the room,” Dr Trinca said.

However, he conceded that at a cost of $120 million — nearly the price of the original building — any grandiose plans for enlargement would have to wait until after the COVID-19 pandemic.