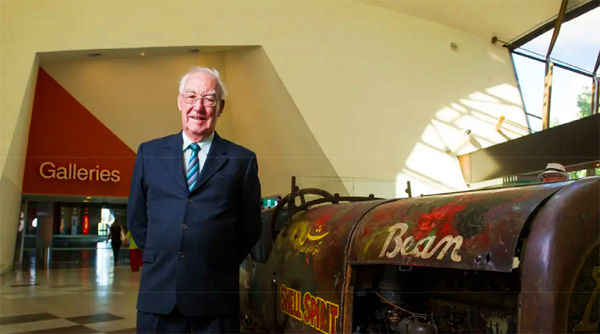 Terry Birtles, who has written a book about Francis Birtles, a distant relation famous for driving the Sundowner car, pictured, across continents in the 1920s. Credit: Dion Georgopoulos.

Monty Jacka, Check out the car that crossed continents against the odds, The Sydney Morning Herald, 22 February 2019

A history-making car has been put on display at the National Museum of Australia to mark the launch of a book covering its incredible journey down Australia’s east coast 93 years ago.

The Sundowner was the Bean motor car used by adventurer Francis Birtles when he made the first continuous journey by car from Darwin to Melbourne in 1926. A year later he embarked on another record-breaking journey, becoming the first person to drive overland from London to Melbourne.

The car remains battered and scratched, still covered in Middle-Eastern sand and South-Asian mud from its  journey.

After spending years in sheds across Australia, the car officially joined the collection at the National Museum of Australia in 1981, but it hasn’t been on display since a brief stint in 2013. To acknowledge the launch of Driven, a biography of Francis Birtles, the Sundowner has been put back on display at the museum.

The biography was written by Terry G Birtles, a distant relative of the adventurer.

His book tells the story of Francis Birtles and his two record-breaking journeys. During the journey from London to Melbourne in 1927 and 1928, Birtles used the Sundowner to cover 26,000 kilometres over nine months. When forced to cross waterways, he boarded ships, an oil tanker, and even a bamboo raft to continue his journey.

Tens of thousands of people gathered in Melbourne for the completion of the trip, which had seen the Sundowner driven through Europe, Asia, Africa and Australia.

Its journeys “pushed the boundaries of human and motoring triumphs”, Dr Trinca said.

“It represents the growth of the early motor car industry and the rise of the use of cars for recreation and exploration in Australia,” he said. “Birtles’ transcontinental drive paved the way for highway travel.”

In his book, Mr Birtles wrote of how Francis Birtles and his voyages shaped the views of Australians at the time. The adventurer published a number of newspaper articles, in which he encouraged greater public awareness of the remoteness of pioneer life, drawing national attention to Aboriginal customs, as well as native plants and animals, Mr Birtles wrote.

The Sundowner will be on display at the National Museum of Australia until March 14.