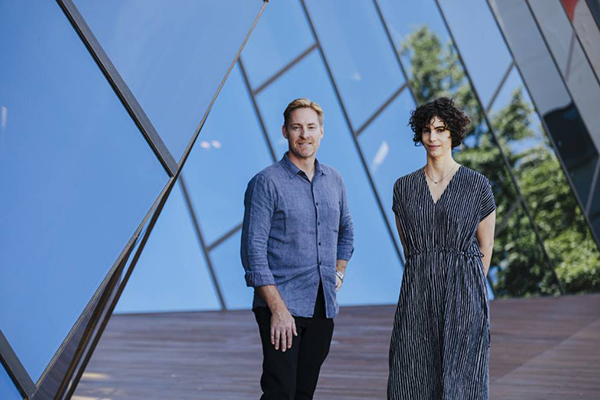 Sally Pryor, A New York design company is set to revamp the National Museum of Australia, The Canberra Times, 13 January 2020

A New York design firm is on a mission to bring an “emotional layer” to the National Museum of Australia, as part of a major shake-up of its display space.

Local Projects, the company behind the September 11 Memorial in Manhattan and the revamp of Hyde Park Barracks in Sydney, has been commissioned to deliver the museum’s new permanent environmental gallery in time for its 20th birthday in 2021.

The new gallery will immerse visitors in the story of the Australian continent, its ancient origins, geological features, unique species, natural forces and the part humans play in the ecosystem, with more than 1,200 unique objects from the museum’s collection, many of which have never been displayed before.

The $20.5 million space will be part of a $266 million master plan for the museum’s expansion over the next decade.

And if Local Projects do their job right, say two of the people heading up the project, we’ll never know they were there.

Billed as an “experience design” studio, Local Projects has designed or revamped dozens of major museums in the United States and Europe.

On a recent trip to Canberra to oversee the start of work on the project, executive account director Brook Anderson and director of content Rebecca Bureau spoke to The Canberra Times about why the company had accepted the museum’s brief – one of the largest projects in the company’s history.

“I think the key word that we found in the brief was ’emotion’,” Mr Anderson said.

“It was the kind of emotional layer that the museum wanted to integrate into their visitor experience, and that’s really what Local Projects thrives in, creating very emotive experiences for visitors that are driven by story first and connection to person first.” 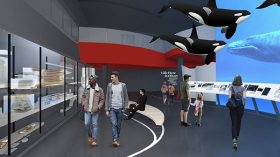 Visitors will get to experience the migration of Humpback whales in an immersive life-size projection, featuring model orcas from the Eden, NSW area. Picture: Local Projects.

Ms Bureau said that once the company’s vision comes into the place, the interior of the building will be transformed.

“Ideally, the exhibition that we create, the landscapes that we create, will have a visceral and emotional impact on the visitor merely by virtue of them passing through it,” she said.

“And there’s a cumulative effect there, and one that invites them to pay closer attention, to listen, to feel, to absorb a sense of responsibility for this continent and the lives within it.”

She said working with the museum’s infamously idiosyncratic building was an opportunity, rather than a hindrance, and that the building itself would play more of an integral role.

“Our first approach was to say that this building is extraordinarily unique, and it makes its own statement, and it behoves us not to fight that, but to let it have its own identity and to build an exhibition within it, pulled away from the walls to allow that architecture to speak on its own,” she said.

“Our first design move then was to create exhibition landscapes that have their own integrity. It wasn’t fighting that very strong voice the building has, but took advantage of the opportunities where the space grew, where there’s double height or triple height, where there are unusual angles, and how does that actually put our exhibition into a better perspective.”

Mr Anderson said that museum staff had had a revelation during the initial walk-through, when they saw how much of the building was obscured or underplayed with existing exhibition spaces.

“The team had a real ‘aha’ moment in having a view shared to see certain architectural features that were kind of hidden because of all the exhibitry and millwork and nuggety content that was there,” he said.

“We realised, oh, we should really let the building breathe on its own and be its own experience, and then these landscapes will become these pockets in which you start to understand these larger narratives.

“So that was a huge opportunity for us, this dialogue between the exhibition framework and the architectural framework.”

He said Local Projects would know their work was complete when people came away having learnt something about Australia, rather than about the American company working behind the scenes.

“It’s almost like we’ll know our job is done well if visitors’ behaviour has been altered in some way so that they’re ultimately coming away by learning, through touching, feeling, acting, whatever they’ve done, and they’ve done that without thinking about who put those things into place,” he said.

Ms Bureau maintained that coming in as outsiders would be key to their success, especially as they had been treated to a long journey around the north of Australia with the museum’s curatorial team.