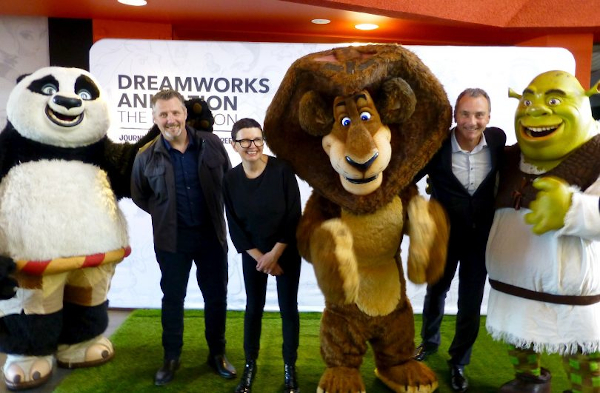 Director of the National Museum Dr Mathew Trinca doesn’t often get kudos from his own children when he tries to pique their interest in the many exhibitions that are hosted there.

This time, he has increased his coolness factor tenfold.

“If the initial reaction from my children to this exhibition is anything to go by, this will be a massive hit,” Dr Trinca said while launching the internationally acclaimed DreamWorks Animation: The Exhibition, which opens at the Museum tomorrow, 12 September, and runs until February next year.

Dr Trinca launched the exhibition to a captivated audience of school children from St Joseph’s Primary School in Wee Waa. The students were quick to road test more than 400 objects from the studio’s archive, including original artworks, storyboards and scale-models, as well as immersive and interactive digital experiences.

They also got the chance to get up close with some of the much-loved characters from iconic DreamWorks movies like Shrek, Po and Alex the lion, while viewing models, masks, maps, posters, paintings and other original artworks. 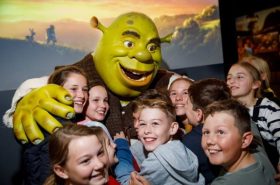 Students from St Joseph’s Primary School in Wee Waa were keen to get up close with DreamWorks’ stars like Shrek. Photo: National Museum of Australia.

Dr Trinca said the exhibition will capture the imagination of young and old.

“Fans of animation and filmmaking, nostalgic adults and families will all love this show,” Dr Trinca said.

“This exhibition is especially important because it goes to the heart of something that is so important to us all, and that is great storytelling. These works act as an emblem for the age in which we live.”

The exhibition comes to Canberra following a global tour and showcases new content including character models, development sketches and early concept multimedia that reveals how some of our favourite films were conceived and developed.

The exhibition is also the first large-scale, behind-the-scenes exhibition created to celebrate 20 years of DreamWorks Animation. It includes an impressive scale model of the Far Far Away castle from Shrek 2 (2004) and development sketches of characters from Trolls (2016).

A highlight of the exhibition is the immersive Dragon Flight theatre experience, where you can view the town of Berk from the back of a dragon and see the scenes of the movie unfold from the perspective of the animators.

One of those is DreamWorks’ supervising animator Marek Kochout. He described the exhibition as a coming home experience after starting out in Mt Isa before he moved to America to pursue his dreams in animation.

In a strained American accent, Mr Kochout said the exhibition is also a snapshot of his 21-year career at DreamWorks.

“This exhibition is really a trip down memory lane for me. I see things here and remember which film my kids were born during and remember doing the various sketches.

“I now work with a bunch of Australians at DreamWorks, and especially these days, you can work with virtual studios and online schools, so the opportunities are amazing.

“We couldn’t have done How to Train Your Dragon 3 20 years ago with the technology that we had then,” he said.

Mr Kochout said it’s always hard to know if a film will resonate.

“You think they’re going to be great but you don’t know how they are going to resonate with anyone until they actually come out. So to be part of this exhibit is a real credit to the filmmakers and artists who have created something that resonates with people.”

While attending the launch, Member for Ginninderra Gordon Ramsay said DreamWorks movies had been a firm part of his family life.

“One of the most important things to learn from DreamWorks movies is that while hope is frail, it is also something that is hard to kill.

“I’ve also learned that ogres are like onions and they have layers, and that pandas really can do kung-fu,” Mr Ramsay said.

Created by the Australian Centre for Moving Image, in partnership with DreamWorks Animation, the exhibition unfolds over four main sections, tracing the characters, stories, world and drawing room of the various movies.

Before coming to Canberra, the exhibition has been enjoyed by audiences in Singapore, New Zealand, South Korea, Taiwan, Mexico, Canada and Brazil.

For further information about DreamWorks Animation: The Exhibition, visit the National Museum of Australia website.