You are here: Home » Articles filed under: 'News' » Article: 'NMA explores the intrigue of pearls'

NMA explores the intrigue of pearls 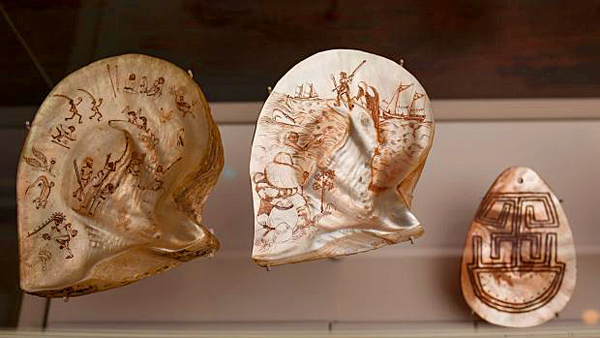 Peter Yu remembers heading down to the jetty at Broome waiting for his father to come in on the pearling luggers at high tide. The children would clamber over the wooden boats, while the divers took a break, waiting for conditions to settle down before they’d head out again.

His father Yauhong Tai was one of the last hard-hat pearl divers in the Broome area and for Yu a new exhibition at the National Museum of Australia is a special story from both a personal and cultural perspective.

Lustre: Pearling & Australia explores the nation’s pearling industry which also showcases the beauty, significance and intrigue of pearls and pearlshell across time and culture.

It features not only a rare 2000-year-old pearl and a historic hard-hat diving helmet but also examples of how pearls and pearlshell have been used in both ancient and modern cultures.

“From a personal point of view this is a very special story,” said Yu, a Yawuru man from the Kimberley Region, and chief executive officer of the Nyamba Buru Yawuru Corporation.

“I grew up with the pearling industry and it’s always played a special part in the story of my people.”

The exhibition is the result of a special partnership between the NBYC and the Western Australian Museum and NMA director Dr Mathew Trinca said he was delighted to bring Lustre to Canberra.

“Lustre is both beautiful and historically important, exploring how Aboriginal people have valued and collected pearlshell for at least 20,000 years,” Dr Trinca said.

“But it also examines the modern industry which has developed around this highly prized resource.”

Lustre looks at the pearling industry largely from the Aboriginal perspective, paying tribute to the skills of the Asian, Aboriginal and Torres Strait Islander workers of the

The exhibition also touches on what James Dexter, from the Western Australian Museum, called “a story of exploitation and discrimination”.

The pearling industry flourished during the period of the White Australia policy but master pearlers gained exemptions for their Asian divers “because white men couldn’t dive,” said Dexter.

Yu’s father came to Australia from Kuto Island in the New Territories off Hong Kong after the World War II, settling in Broome where he met Yu’s mother Margaret Dolby, a Yawuru woman.

The exhibition also touches on “blackbirding”, where Aboriginal workers were “obtained by deception or force” and set to work on the luggers.

But at its core are the beautiful pearls and pearlshell, whether they have been used in modern jewellery or have been carved into cutlery, or decorated with intricately drawn designs.

The exhibition also includes vibrant audiovisual material and visitors can access personal stories on an audio tour through their own smart device.

Lustre: Pearling & Australia is on exhibition at the National Museum of Australia until July 22, 2018.